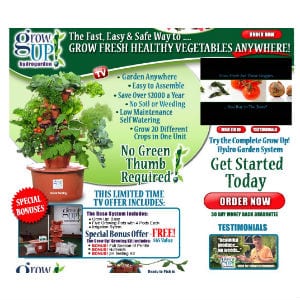 The Grow Up Garden is an in-home system that introduces you to the world of hydroponics. It is a way for you to get the benefits of having a garden, without all of the drawbacks of having a garden. But it’s only useful if stuff actually grows, and that’s what most people want to know, whether or not it works.

Overview
We’re all aware of how great it is to have a garden, having your own fresh vegetables so you don’t have to buy them from the store and pay high produce prices. But for many of us, the reality of owning a garden just isn’t possible due to the yard space it requires, or the physical labor it entails. Hydroponics is a form of gardening that doesn’t use any soil, so you’re don’t have to tend to a garden like you normally would, and it frees much of the space and time constraints of a traditional garden.

The Claim
The makers of the Grow Up Garden have taken the hydroponics concept and applied it to an at-home, all-in-one kit that attempts to take the guesswork out of starting your own garden and makes it paint by numbers easy. They say that it is the easiest garden you can imagine, and that you can put it just about anywhere. They also say that the price is very reasonable and that this helps you to avoid all of the things that make gardening a chore, like having to weed it, water it, getting your hands dirty and having to bend down and get on your hands and knees.

They also say that with just some regular sunlight you can start to see signs of growth faster than you ever could with an outdoor, in-the-ground garden. They say you can grow 20 different types of vegetables all in one unit, so you’re getting a lot of variety in a small square footage.

The Hype
This has its own infomercial, which exaggerates just how expensive vegetables can cost in the store, and trumps up the benefits of having your own veggies.

The Cost
The Grow Up Garden is $250 if you make just one payment. They’ll let you try it out, but that requires a $50 initial payment, and a $43 shipping charge. The shipping charge is waived if you pay it all up front. Since you’re supposed to see signs of growth in a matter of weeks, they only give you 30 days to make up your mind. If you don’t return the unit in this window they charge you an additional $200 making the total price $293 if you opt for the trial. If you return it you’re out the $43 plus return shipping charges, but they credit back the $50.

The Commitment
The big selling feature of this garden is that you don’t have to commit to the toil of having a garden, nor the long wait for things to grow. It should also start paying dividends when you are able to eat the food from it rather than buy it from the grocery store.

Evaluation
The Grow Up Garden is not re-inventing the wheel because hydroponics has been around for many years now. The ingenuity here is the way that they’re making it more accessible to more people, since it’s not the easiest thing in the world to go from not knowing anything about hydroponics to having your own hydroponic garden. So what you’re really paying for here is convenience, since it would be possible to set something like this up on your own, but the time it would take to learn how, and the expense it would take to buy all the equipment means you’re coming out on top with this system.

You really do have to stop and consider just what you’re getting here. When you buy vegetables in the store, they might look fresh but there’s no way to tell the distance that they’ve traveled, when they were actually picked, and what was sprayed on them to make them look the way they do. You can avoid many of these concerns by going to a farmer’s market, but unless you live in an area that has a regular one, they are hard to go to on a regular basis. With a garden like this you are there from the beginning and you know exactly what was used on your plants, and when the food was picked.

The Grow Up Garden is getting our Solid Try rating, since it offers a quick and affordable way to get started in the world of hydroponics. Their trial offer is set up kind of silly, so if you’re serious about it you might as well save some money by paying up front, as you’ll still be covered by the 30 day guarantee, and this way you’re only out return shipping costs if it doesn’t start showing signs of growth after a few weeks.

Our Recommendation
If you’ve been fed up with the produce you buy from the store, either because you know that the conventional kind is sprayed with chemicals, or the organic kind is too expensive and goes bad too fast, you should try this out. Also, if you’ve been aware of hydroponics but didn’t know how to get started with it, this could be your fast track into it, without wondering what to do to get things to grow.

What do you think? Does Grow Up Garden work or not?

← Previous Does Richard Simmons Project Hope Really Work?
⚅ back to blog
Next →Does the Luma Stylus Really Work?