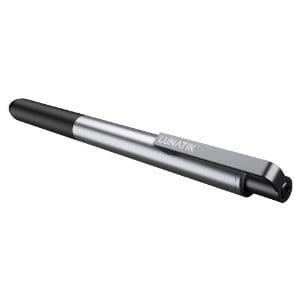 The Luma Stylus is meant to be a replacment for your finger when using different types of devices with touch screens. It also has some additional features like a real pen, and a flashlight. But people want to know whether or not it actually works they way it is shown to on TV.

Overview
With so many devices these days relying on a touch screen for input, we’ve all gotten to be a little more nimble with our fingers. But some of the tasks that are required can be a bit cumbersome, like trying to type on a small keyboard with big thumbs, or trying to touch a very specific point on a map with a big finger. Many of the devices have shrunk down in size, but retained bigger screens since buttons are not really necessary anymore, but that just means that they rely on touching even more.

The Claim
The Luma Stylus is supposed to take away all of the frustrations that may arise when trying to use touch pads on things like smartphones, tablets, and other devices. They say that you’ll have far more accuracy with their stylus then you will with your finger or thumbs. They also say it works to keep your screen free of smudges and smears caused by the natural oils that are always on our fingertips, or perhaps from using the device when your hands aren’t clean.

The Hype
There isn’t too much hype to this, because they problems they describe are real, and we can all relate to not being able to hit the keys we want to due to the buttons being too small. And we’re likely all familiar with a smudged up screen from all the swiping and typing.

The Cost
The Luma Stylus is set up on a buy one get one free, just pay shipping basis. This means you can’t buy just one and you’re going to end up with two of them for $24 or a per stylus price of $12. It shouldn’t be too hard to find someone that would want the other stylus, and it’s a way for a manufacturer to move more product, rather than selling one for $10, you can sell two and make twice the price. The only drawback from a consumer standpoint is that you’re paying more for shipping than you are for the actual product, so if you want to return it you’ll only get a $10 refund and be out return shipping costs on top of the $14.

The Commitment
If you find that you’re using your touchscreen devices a lot, you’ll likely find that you end up using this stylus a lot. You may also find that when you’re able to use it more easily, you end up using it more often. Most people are going to be interested in getting this for the time savings due to it being less of a hassle than trying to peck for a specific letter on a keyboard.

Evaluation
The Luma Stylus is getting a few things right here. They are taking the concept of using a stylus, something that has been around as long as tablets have been around, and are packaging it in a way that makes it very attractive by being extra useful. With the addition of an actual pen, and a handy flashlight for times when you need one, they’ve tripled the reasons for carrying this around with you. If it were just a stylus it might be a bit burdensome to take it everywhere, but with the extra features it makes it something to have everywhere.

It’s also a nice way of protecting your electronic devices because it won’t scratch the surface, and you’ll be using less pressure when you tap on this. Keeping the surface free of smudges also makes it easier to see what’s on the screen, and means that you’ll be spending less time trying to clean it off. For many gaming apps the ability to swipe and tap quickly is a major plus, so it could even lead to you beating your old high scores.

The Luma Stylus is getting our Thumbs Up rating, based on a number of factors including user feedback, design, and usefulness. We don’t really like buy one get one free just pay shipping offers, but with this it makes sense because it’s not a very expensive item on its own, and the chances are that you’ll be able to get use out of two of them.

Our Recommendation
If you already make it a habit of carrying a pen or pocket light with you, you might as well upgrade and make it a stylus that you can use to play games on your smartphone or tablet, or to type more quickly and easily than you can using fingers and thumbs.

What do you think? Does Luma Stylus work or not?

← Previous Does the Grow Up Garden Really Work?
⚅ back to blog
Next →Do Zoomies Binocular Glasses Really Work?