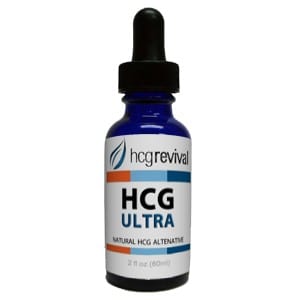 HCG Ultra is trying to navigate the murky waters of hCG diets and sell a product based on a diet that has a lot of controversy behind it. The reason is that several people have reported being able to lose weight on an hCG diet, but the rest of the story is they’ve restricted themselves to 500 calorie days to do it. So does this product require the same sort of commitment, and does it work at giving you that full feeling, even when you’re starving?

Overview
Any time you reduce the number of calories you consume to 500 per day, you’re going to see dramatic weight loss. Especially when those calories are coming from things like apples and green vegetables. The reason most people can’t stay on with something like that is they get too hungry and eventually give in to eating more food. The point of using hCG is that it is supposed to stop the hunger signal so you feel fine, even when your body is not getting what it needs to stay properly nourished day by day.

The Claim
HCG Ultra are drops, so you don’t need to get injections, making it a more friendly choice for those that don’t like needles. There is some debate over whether drops are as effective as the shots, with most people saying that the injections are the only true way to go, and that these should be obtained by a health care specialist and not purchased online and self administered.

They claim that you can lose anywhere from 10 to 40 pounds or more, and the longer you stay on it the more you’ll lose. The Dr. Oz show said that it is typical to lose a pound a day, and he was very impressed by this figure.

The Hype
hCG diets got a lot of attention when they were featured prominently and given their own segment on the Dr. Oz show. He filled his audience with a group of people that claimed to have had success with it, and even brought in a doctor that prescribed the diet to her patients. These people all seemed to be using the injection method, so it’s not a true apples to apples comparison to using drops, but it did hype up hCG and introduced it to a lot of people that didn’t know about it before.

The Cost
HCG Ultra comes in three different formats, depending on how much weight you want to lose. Their starter kit is $60 and is for those that want to lose 10 to 20 pounds. The next level is $100 for 20 to 40 pounds, and their largest kit is for losing more than 40 pounds and goes for $160.

The Commitment
They are requiring you to stick to the 500 calorie per day limit, and they say that if you deviate from it you will gain weight immediately. This is a very strong commitment. This is a very radical diet plan and should not be followed by those that want to take a more natural approach to weight loss. The biggest mental block people have in regards to dieting is taking the mental attitude of putting the weight on slowly and taking it off quickly. Why should one be done any faster than the other?

Evaluation
HCG Ultra is claiming that their drops contain enough hCG in them to help stave off hunger, when you’re only eating a fraction of the calories that you normally would. That’s a pretty bold claim, and one that only a powerful drug could do.

Because this is a homeopathic formula, there is only a trace amount of hCG in it, and potentially none at all. The homeopathic process dilutes substances and retains their essence or vibration. It’s something that carries a lot of controversy with some saying it makes perfect sense and works wonderfully, and others saying it’s pure quackery and a way to sell water.

HCG Ultra has a lot of red flags. First, they advocate a 500 calorie diet with little regard to the effects this will have on the body, the metabolism, and your organs, both short term and long term. Not to mention the psychological effects of essentially starving yourself for a period of time. They are also present a homeopathic product, which has its fair share of dissenters. They also have had a considerable amount of complaints with their ordering processed, with hundreds of upset customers claiming that they were overcharged, and unable to get a refund.

That’s three strikes and where we’re from that means you’re out. We’re give this product the Thumbs Down, and would pass on it. There are plenty of other ways to lose weight, and if you’re looking to lose weight quickly there are tons of peer-approved diet pills that are all natural and designed to give you fast results without forcing you to reduce your food intake so severely.

Our Recommendation
We don’t advocate taking extreme measures like this. You’re basically 500 calories away from a pure starvation diet, and hoping that several drops of any product will keep you from crashing and binging is a little unreasonable. Our suggestion is to pinpoint when you started gaining the weight, calculate how many months its been, and give yourself just as much time to lose it. That’s the healthiest way to go about things, and a diet that advocates 500 calories is only setting you up for eating disorders and an unhealthy perspective on food and the body.

What do you think? Does HCG Ultra work or not?