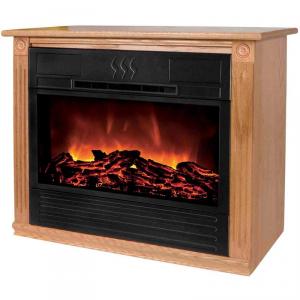 The Heat Surge Fireplace promises that you’ll be able to save money on your heating costs by only heating the rooms you want. They also say that their fireplaces give the feeling of having a real fire going, so you can replicate the ambiance of sitting by a real fireplace, without all of the smoke, and potential fire hazard. But can something like this really provide enough heat, do it in a manner that keeps your electric bill low, and give the feeling of a real fire? We’ll let you know.

Overview
The concept of having a portable and fake fireplace is a pretty solid one. Many houses don’t have a built in fireplace, and most heaters are not very pleasing to the eye. By having something that you can move between rooms and put where you want it, and also something that you can simply turn on and off without having to light and get ready, you are getting the benefits of having a fireplace, with none of the drawbacks, and all of the features of having a space heater.

The Claim
There are a lot of imitation fireplaces out there, the Heat Surge Fireplace just happens to be one that makes a lot of different claims on what it can do. They say that it uses what they call Zone Heating, which means instead of trying to heat your entire home with a central heating system, you simply heat the room you’re in. This is a method that is popular in many parts of Asia that get cold in the winter. They also say that the wood that is used on it is handmade by the Amish.

The Hype
The hype is that this is just an imitation fireplace, but they are talking it up like it’s the greatest thing since sliced bread. Just remember that it’s basically a glorified space heater, so don’t think that it is going to revolutionize your life or save you hundreds of dollars a year in heating bills.

The Cost
The Heat Surge Fireplace can be found for less than $500 at online retailers or through their official site for more than $500. Either way you cut it, that’s a pretty big investment, and it would need to save you a good amount of money each month in order to justify that initial expenditure.

Most of the people that have bought this have chimed in that there’s no way this would help you put a dent in your heating costs because it doesn’t generate enough heat to properly heat a room, and you’re left either still using your regular heating system, or having to use another heater in addition to it. So the only real reason to get this is if you’re not too concerned about whether it can heat a room, and just want it for its looks.

The Commitment
All that you are required to do is turn it on and bask in its warm glow. At least that is the theory. However, most people have said that it doesn’t do much in the way of heating up your home, so there’s not much point in even doing that.

Evaluation
The Heat Surge Fireplace is almost unanimously panned by those that have tried it out. They say things like it doesn’t do anything more than a cheap space heater would. Others say it’s basically just overpriced furniture, pointing to the fact that most of the design and engineering went into the way it looks and not the way it works. There are others that are saying it’s a total scam, and relies entirely on its marketing in order to make any sales. The overall consensus is that it is definitely not worth purchasing.

The Best of Both Worlds
The big draw to this product was getting the joy of having a fireplace, with it’s consistent warmth and ambient glow, while having the ability to move it around and put it where you need it, like you can with a space heater. By making it look really nice, they also lead people to believe that you will have something that you don’t have to hide when company comes over, and even something that could be the centerpiece of a room. The only problem is that if it doesn’t provide the heat you need, it doesn’t really make sense, as there are other, less expensive ways to make your room more appealing than spending $500 on something like this.

We’re giving the Heat Surge Fireplace a Thumbs Down, even though we like the idea and really wanted it to work, it seems like they haven’t followed through on the execution, and this could be a pricey mistake if you do purchase it. Perhaps one day a company will come along that will make a similar product but get the heating element right. Or maybe Heat Surge will update and upgrade this unit, since they got the styling right now they can just focus on getting the heating right and they’d have a winner.

Our Recommendation
This attempted to solve the problem of traditional heaters being such an eyesore, and regular fake fireplaces not being so good at heating up a room. But unfortunately it’s all looks and no results here, and you should either continue your search for a fireplace that works, or go with a well-reviewed space heater instead if your goal was less about aesthetics and more about the warmth.

What do you think? Does Heat Surge Fireplace work or not?

← Previous Does the Temptu Airbrush Really Work?
⚅ back to blog
Next →Is IX Web Hosting Any Good?

19 Customer Reviews on “Does the Heat Surge Fireplace Really Work?”