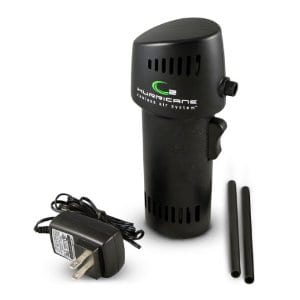 Hurricane Canless Air says that it is starting a revolution against using ordinary compressed canned air. It cites many reasons for this, by being a “greener” product, and by providing a longer flow of air, and being rechargeable. But can something like this really produce the forceful burst of air you’re used to from a can of air?

Overview
While it might seem a little silly to start a revolution on something as mundane as compressed air, when you stop to think about it more, it starts making sense. Many of the compressed air cans out there contain toxic chemicals, and are contributing to air pollution in their own small way. Not only that, but they’re disposable, so when you’re done with it you end up throwing canister into the trash.

The Claim
Hurricane Canless Air says that it is non-toxic, rechargeable, and that it uses the same air we breathe in order to get the job done. They say that it has no chemicals, and does not contain any greenhouse gases the canned air does. They also claim that it doesn’t present any chance of being used as an inhalant or to get high with, the way some kids use canned products, and therefore no proof of age is required to buy it, since you’re just inhaling the same air that’s everywhere.

They also say that you can use this continually for a full 18 minutes without worrying about the can freezing up on you. They also claim that there is no residue left behind due to any chemicals. They say that with typical canless air you end up leaving behind trace amounts of the chemicals that are in it.

Really Green?
It’s up to you to decide whether canned air is as toxic as they claim it is, and whether you are making a big difference to the environment. But making a small difference is what it’s all about. If many people bought this and used it and there was a sharp decline in the amount of canned air that was used, it could make a big difference. At the same time, the chemicals and toxins in compressed cans of air can vary from manufacturer to manufacturer, so you could also find a company that doesn’t use as many chemicals in theirs and arrive at the same place. But overall this does seem like a green product, both for the air, as well as less trash due to not using up can after can of compressed air.

The Cost
The Hurricane Canless Air system is $70 and comes with a 30 day money back guarantee. Of course this is far more expensive than buying an individual can of compressed air, but that is part of the green movement, buying things you can reuse that are more expensive, and recouping the costs over the long term.

Evaluation
Many of the people that have bought and used the Hurricane Canless Air compressor said that it doesn’t have the kind of power it promised, but that it’s still good for many jobs around the house, and that they’re happy they bought it. It’s important to make sure that it gets a full charge, as that can mean the difference between being happy with the results it gives, and being let down.

Not Enough Pressure?
A common complaint is that it doesn’t provide the quick blast of air that a can of air is known for. It is that blast that usually provides the desired effect and cleaning action. In the promo spots this is shown as having the same kind of pressure as canned air, and is the main reason why people are trying it out. It seems odd that they would make something like this that doesn’t live up to its most basic claim.

Hurricane Canless Air get a Try rating from us, because the reviews are mixed so depending on what you plan on using it for, you will either be happy with it or disappointed. For some uses, it shines, but for others it seems to fall short so don’t go into it thinking that it will solve all of your mini air compressor needs. If it only replaces a few different uses, it would still be worth having as an accessory for the home.

Our Recommendation
If you typically buy cans of air, then you should definitely give this a trial run. If it does what you need it to, then you won’t have to buy another can of air again, and you’ll not only save money, but you’ll also avoid contributing to both air and landfill pollution. If you’re not impressed with it once you get it home just return it within the first month and there’s no harm done.

What do you think? Does Hurricane Canless Air work or not?

← Previous Does Eye Secrets Really Work?
⚅ back to blog
Next →Does Provailen Really Work?