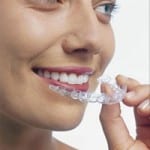 You might have considered Invisalign if you’ve got a tooth or some teeth out of place and don’t want traditional braces. The lure is that you can fix your teeth without having other people knowing about it because you won’t have garish metal braces glimmering every time you open your mouth.

Overview
The theory is that there are many adults that would like to fix their teeth, but haven’t done so because they don’t want to have the ugly metal “brace face” look, or seem like they still need braces as an adult.

The Claim
Invisalign claims that you can get braces-quality results without the hassle and grotesque look of regular metal braces.

Invisalign uses a computer model to map out the current location of your teeth, and simulating where they’ll migrate to during the alignment process.

Invisalign offers more than just a better look. By being removable you can take them out when you eat, and also when you brush and floss, so you can keep your teeth nice and clean throughout the treatment. A common problem with traditional braces is that food gets stuck in them when you eat, and it’s hard to brush and floss when there’s metal wiring running across all of your teeth.

The Hype
There hasn’t been too much hype surrounding Invisalign. It sort of seeped into the mainstream consciousness as the hip way to get your teeth straightened if you’re not in elementary or high school.

We define hype as a product’s manufacturing overstating how great their product is and making claims that it doesn’t live up to. An example of Invisalign hype would be if they said that it was painless, or if it did a better job than traditional metal braces.

Is it Really Invisible?
What they do focus on is how clear the braces are, and how much better you’d look if you used Invisalign rather than conventional braces. The trays are very clear when they’re placed onto the teeth, not entirely invisible, but pretty close. When they’re not in place they don’t look invisible at all, they look like clear plastic. But when they are put into place, they are hardly noticeable.

Some users have stated that there are adjustment brackets with some trays that make them easier to see, but they are still far less obvious than the alternative.

The Cost
Invisalign states that their costs are similar to those of traditional braces. The trouble is that it’s not covered under most dental insurance, the way metal braces are. Also, Invisalign will cost more if you have a serious problem, because more trays will be needed in order to gradually put your teeth where you want them to go.

Depending on what country you’re in, how severe your problem is, and how many trays you’ll need, Invisalign can cost anywhere from $3000 to $5000 or more.

The Commitment
You have to commit to wearing Invisalign 24/7 except when you’re eating. This is the only way that you’ll be able to get the results that you and your dentist have talked about.

You also have to make sure that you return to the dentist to get your new trays and the pre-determined intervals. Failure to complete the protocol will lead to poor results and a longer-than-needed duration of treatment.

Evaluation
Invisalign is not really invisible. While it does look better than a mouth full of metal braces, it’s still noticeable in person and in pictures. It is less visible than ceramic braces, which tries to color match the outside of braces with your teeth’s color. Ceramic braces are the kind that Tom Cruise got when he straightened his teeth.

Invisalign will get your teeth straight, but once you complete the process, you’ll still need to wear a retainer, your last tray, or have a permanent retainer installed in order to maintain the results. Your teeth will start to shift back to their original positions if you don’t use some sort of device to keep them where you’d like them to be. This is something that is usually only brought up when you’re consulting with the dentist.

Our Recommendation
If you’re serious about having a straight smile, and are sure that you will keep your trays in at all times when you’re not eating, Invisalign is probably a good choice for you.

What do you think? Does Invisalign really work?