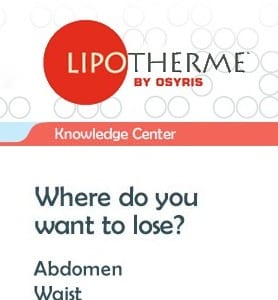 Lipotherme is presenting itself as the answer to those that are interested in liposuction, but don’t like the idea of getting poked and prodded as they suck the fat out of them. This is a minimally invasive way that is supposed to melt the fat using lasers. So what do those that have already gone through with the procedure have to say about it?

Overview
The idea of liposuction is pretty straightforward, and is as close to having someone stick a straw in you and suck the fat out as you can get. The idea behind laser liposuction is that rather than use an archaic process like sucking it out, you can simply heat it up to a level where it turns to a liquid and the body can then flush it out on its own.

The Claim
The proponents of Lipotherme say that it targets the problem areas of the body, the ones that seem to be the hardest spots on the body to lose weight, and it literally melts the fat off, liquefying it and removing it. As a side benefit it is also supposed to tighten the skin, since most people that lose weight in those problem areas suffer from the problem of loose, saggy, or wrinkly skin afterward.

The Hype
Promising someone that they can finally be rid of their problem zones is full of hype, even without trying. A problem area resonates deeply with an individual, and there are a lot of self esteem issues and self image snags that come along with them. So when you say that they can finally be rid of that one part of their body that they dislike the most, the feelings of confidence and excitement propel that person to go ahead with the treatment, even if other warning bells are going off inside their mind.

The Cost
The cost of Lipotherme will vary by demographic, because each practitioner will earn more or less depending on which city you’re in. In some more rural areas you could have it done for less than $2000, and in some of the bigger metropolitan areas you can expect to pay over $5000. It will also depend on how many treatments you need to undergo, which depends on how much overall fat you want to remove.

It’s a higher price to pay than ordinary liposuction, but then again they are doing their best to convince you that it’s far more preferable, as they have recognized that this is their biggest competitor. The interesting thing is that many doctors that offer Lipotherme also do liposuction, so you have to watch out that they aren’t trying to upsell you this for a bigger payday.

The Commitment
This would represent a lower commitment level than going with a more invasive procedure like liposuction, and an even lower level than changing your diet and exercising. It has the fast results that a change in diet and exercise can’t match, and it has the added benefit of not puncturing your skin, and being an outpatient procedure that you don’t have to fret so much over. It’s absolutely amazing to think that you can tailor make your own body, almost like pointing and shooting the fat away. But a healthy way to look at it is that it is assisting you with losing the fat, rather than relying on it as a crutch.

Evaluation
Lasers are often revered as a Space Age way to get rid of a problem, from laser hair removal to laser tattoo removal, there’s even laser teeth whitening and of course laser eye surgery. But at the end of the day it’s the results that make all of the difference, and you also have to consider the safety concerns since this is a relatively new technology and there are no long-term studies to look at to help you with your decision.

That being said, the peer reviews on whether this works or not seem to be mostly in its favor. There are plenty of before and after pictures, but in this day and age it’s a wonder anyone even uses them anymore, and a bigger wonder that anyone makes their decision based on them. A before and after video would be more impressive, and more convincing, as well as harder to doctor up using a simple image editor like Photoshop.

Lipotherme is getting our tentative Thumbs Up review. It does seem to work for the majority of those that go through with it, but there’s simply no way to see what the 10 year or 20 year effects are from having it done. The thought of it eradicating fat cells to the point where they never come back is definitely appealing, and if you’ve been battling certain parts of your body and losing for several years you’ll love the idea of finally winning the war.

Our Recommendation
The best thing to do is first change your dietary and exercise habits, because you’ll need to anyway if you decide to go with this. If you find that your results aren’t coming fast enough, or you reach a point where that last bit just won’t come off, then go ahead with this. But if you are thinking of this as a way to avoid eating right and getting more exercise, you’ll just end up back at square one, with a lighter pocketbook to show for it. The extra side benefits to eating better and getting more active make it worth it to try that avenue first.

What do you think? Does Lipotherme work or not?

← Previous Does the Chillow Really Work?
⚅ back to blog
Next →Do doTERRA Oils Really Work?