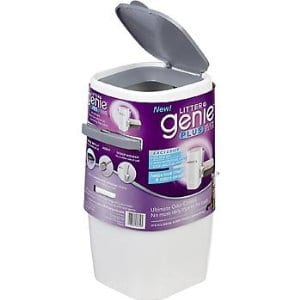 The Litter Genie promises to make things a lot less smelly in your home. This can be a tall order, especially for those that own multiple cats and find themselves cleaning out the litter box multiple times per day. If litter box odor is one of your pet peeves you’ll definitely want to check this out to see if it’s a possible solution, and an instant upgrade to your quality of life.

Overview
Cats are relatively clean animals and pretty easy to take care of, but the one big drawback is the dreaded litter box, and there are several companies that are hard at work trying to figure out the perfect solution to this aspect of cat ownership. When you think about it, it is rather unhygienic to have animal droppings inside the home, even if it is buried in litter. If you want your cat to keep using the box, you have to regularly scoop it out, and then where do you put it? It’s a problem that definitely needs a solution for this modern world.

The Claim
The makers of Litter Genie claim that you can reduce or even eliminate the amount of odor produced by your cat’s litter box, and the messes that you scoop out of it. It’s an alternative to storing your cat’s business in the trash, where it tends to smell things up the most. It works by individually bagging the clumps you scoop out in an airtight bag so you don’t need to make trips to the outdoor trash cans as often as you do now.

The Hype
They’ve been advertising pretty regularly on TV, but that’s not where most of the hype is coming from. This attempts to solve such a widespread problem that cat owners want to buy it as soon as they see it, and just need a little reassurance that it works. Pet owners are always on the lookout for two types of items: one that makes their pets have a more enjoyable experience, and ones that make owning a pet easier. This one might hit on both of these, since cats are known to be particular about the cleanliness of their litter box.

The Cost
You can pick up a Litter Genie for $20 or less at online retailers like Amazon, and you can also find it offline at stores like Target. As an ongoing cost you have to keep buying refill bags for it, and some users have complained that these are overpriced, and could stand to be cheaper. But there are also those that said you just have to bargain shop until you get them for a good deal, and then it makes economic sense to use this.

The Commitment
Their biggest pitch with this product is that it should cut down on the amount of time and hassle spent cleaning out the litter box. So depending on how long it currently takes you to scoop and dispose of litter box waste, this will be a reduction in how much you’re involved with the process. Once you’ve got the steps down for how this works it should become second hand nature and you’ll be able to easily operate it and make quick work of an unpleasant task.

Evaluation
The consensus is that the Litter Genie works pretty well, with a few design flaws that could be easily fixed in future versions. Users say they like it, and that it makes a big and noticeable difference in how smelly things are. But they want to see a handle attached to it so you can move it easily. They also want the unit to be more secure so it doesn’t fall apart as much when you move around. Aside from that the reviews are almost unanimous with a high degree of user satisfaction.

Comparing this to other methods of keeping your litter box clean and smelling fresh, you’ll quickly see that it has its advantages. There are units out there that actually try to make it so you never even have to scoop the litter box any more, and even connect to your water supply so they can flush like an actual toilet. And of course some owners train their cats to use a human toilet so they can circumvent the litter box altogether. This seems to split the difference, still requiring you to scoop, but making it more hygienic and not having waste stink your home up for days.

We’re giving the Litter Genie a Thumbs Up review, as the overall functionality trumps the few things that need improvement, and the end result is that it does make a dramatic improvement on the odor produced by a litter box, and gives you a stronger appreciation of your cat. There are other similar products out there that you may also want to consider, especially that is particularly similar, the Litter Locker II, which gets great reviews.

Our Recommendation
You might want to wait on this one until they come out with a “new and improved” version, or you might want to look at other options like the Cat Genie, a similar-sounding product which once hooked up will do the scooping for you and dissolves the waste so you never have to deal with it at all. If you’ve never looked for products like these you’l be happy to know you’ve got lots of options that can make things more fun for you and your cat.

What do you think? Does Litter Genie work or not?

← Previous Does Gazelle.com Really Work?
⚅ back to blog
Next →Does Derma Pure Really Work?