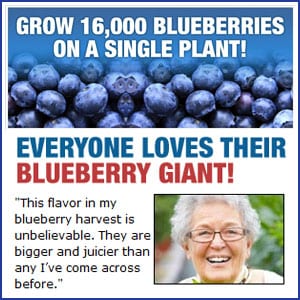 Big, delicious blueberries made at home is the promise of Little Giant Blueberries. Whether you like making pancakes or pies, blueberries are great to have around the kitchen, adding antioxidants and other health benefits to your meals. But can something like this really guarantee a growth cycle, or is that something that Mother Nature just won’t let us do?

Overview
No one can deny that blueberries are a natural way to sweeten up lots of different foods and recipes. They make a great breakfast with some all-natural yogurt, they can be used to add nutrition to an otherwise unhealthy breakfast of pancakes and syrup, blueberry muffins are probably one of the most popular kinds, and they taste great on their own when you just want a healthy snack. Having them on hand would be great, and would save a trip to the store, allowing you to incorporate them into your life without hassle. That is, if this works.

The Claim
The claim not only comes in the form of what their blueberry plants can do, but also what blueberries do for the body. They say that they can help you lose abdominal fat, get a better memory, prevent cancer, improve your heart health, has anti-aging properties, and will make you feel better about yourself in general. Several studies have shown that blueberries contain a lot of anti-oxidants, but on their own they won’t have the ability to counteract a lot of bad habits. What we mean is you can’t expect to undo a lot of bad eating habits just by adding a few berries to your diet, but you could start eating healthier in general, and add blueberries to your efforts.

The Hype
The hype comes from their claim of being able to grow thousands of blueberries at home. Many of us would love this, as it would mean we wouldn’t have to go to the store or the farmer’s market to pick them,

The Cost
It’s $24 for 3 plants because they have a forced buy 2 get 1 free offer just pay shipping. So it comes to $8 per plant, and each plant is supposed to get you at least 16,000 blueberries. So basically this is set up to give you just about as many blueberries as you can handle for $24. Compare that to buying them from the grocery store at $3-$4 a carton and it makes economical sense, if it works.

The Commitment
Everything you need to grow the blueberries is included, you just have to add water and put them in the right spot. Other than that you let nature do her thing and they should grow as expected without a lot of involvement on your part, besides picking them when they’re ripe.

Evaluation
You might think that growing blueberries isn’t rocket science, but the Little Giant Blueberries kit borders on it. Growing plants actually has a lot to it, if you want to get them consistently right every time and produce results you can count on. Also, if you want plants to produce more fruit than they naturally do then you’re going to have to alter them to do so. If the Japanese can make square watermelons to fit in the refrigerator more easily, it doesn’t seem like such a bad thing to make more delicious blueberries.

It’s easy enough to set this up, but there is still room for error. If you keep up with it, and follow the instructions to the letter, you’ll have no trouble seeing a good personal crop of blueberries sprout up for you to enjoy. Science hasn’t mastered everything but they’ve got agriculture down pretty well.

Turning the growing process into something that works foolproof like this is really nice, and Little Blueberry Giant is something that we give our Thumbs Up to, based on the feedback from those that have tried it. Of course any time we deal with Mother Nature there will be room for error and unpredictability so there will be those out there that didn’t get them to grow, or as many as they thought there would be, but overall it should work for you.

The only concern someone would have is that this is a genetically modified food, and they’re not too bashful about that fact. So if you’re more on the organic kick, which is a great thing for you, then you’ll probably want to avoid these. But if you don’t get caught up in all of that then go for it!

Our Recommendation
If you’re OK with the idea of eating genetically modified foods, then you’ll probably love what the Little Giant Blueberries kit produces. These have been tinkered with by agricultural scientists to produce blueberries that are much bigger than normal, taste naturally sweeter, and grow more reliably that the kind you’d find on an organic farm or at your local supermarket.

What do you think? Does Little Giant Blueberries work or not?

← Previous Does Burn the Fat Feed the Muscle Really Work?
⚅ back to blog
Next →Does Zija Really Work or Is It a Scam?