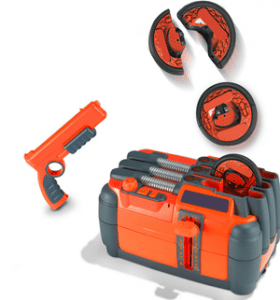 Many young people are intrigued with sports related to firearms, which can cause some parents concern. There are ways to channel this interest in a productive way. One of these may be getting the kids involved with The Live Action Infrared Skeet Shoot.

Overview
Skeet and Trap Shooting are exceptionally popular sports throughout North America and the world. The object is to fire your weapon at targets that are launched either along the ground, simulating a rabbit or small game or in the air which is akin to firing at ducks or other game birds. This Live Action Infrared Skeet Shoot simulates the action of firing at sky launched targets with a safe and fun infrared gun!

The Claim
The claim is that this game will enhance the ability of anyone who wishes to get involved in this incredibly fun shooting sport without the necessary equipment of the real thing!

The Hype
The hype is manly realized from the popularity of the real thing! Skeet and trap have been around for many centuries and has evolved into an Olympic sport that is truly a feat of skill and patience and of course excellent hand/eye co-ordination. This Live Action Infrared Skeet Shoot. may open the eyes of a teen to the possibilities that can be found in the world of shooting sports!

The Cost
The cost of the Live Action Infrared Skeet Shoot. is only $79.95. The quality that you expect from this toy maker is found in all of the products that they make and this one is no exception!

The Commitment
Other than the commitment to having a real BLAST with the kids or grandkids there is little in the way of commitment required for this Live Action Infrared Skeet Shoot. . It stores neatly when not in use and is very easy to set up and use.

Evaluation
Unfortunately with all the negative press regarding gun control laws in the U.S people tend to forget that many law abiding citizens have been involved in shooting sports for centuries throughout the world….and for good reason!….they are massive amounts of fun! Nothing can compare to target shooting or skeet /trap shooting for enhancing hand/eye co-ordination in teens AND for learning the proper use and handling of firearms and it has to be said…for having FUN! Even if hunting is not your thing (unless you are an aboriginal or live off the land there is simply little need to go and shoot live animals in this day and age!) but target shooting is very different and can be a very exciting and all round fun sport. This unit “launches” the targets up to 3 feet in the air so it easy to use even indoors. The “target” breaks apart if hit properly just like a real skeet target would! The guns “action” simulates a real shotgun in both sound and mechanism for a realistic feel. You can even set the time between target launch to make the game easier or harder depending on the “shooter” and their level of competence!

The Hammacher Schlemmer Live Action Infrared Skeet Shooting Game is great way to try skeet shooting in the safety and comfort of your own home. The quality is exactly what you expect from this manufacturer and who knows…maybe there is a budding Olympian in YOUR family! We are prepared to give this product a thumbs up.

Our Recommendation
A fun and easy way to introduce teens to the shooting sport known as skeet. A well- made product that is both fun and safe to use. If you are still adverse to this type of activity but want something esle that your young people may find exciting then check out Knocker Ball.

What do you think? Does the Live Action Infrared Skeet Shoot work or not?