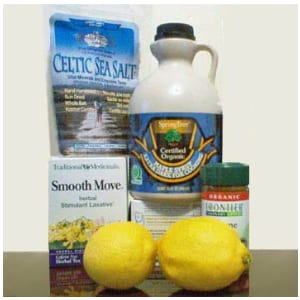 The Master Cleanse may have caught your eye if you have a big event on the horizon, or if you just want to use it as a catalyst to a healthier lifestyle. The idea is simple enough, stop the intake of food, and start drinking a specially formulated lemonade. But can this really work?

Overview
Before we answer that it needs to be said that all weight loss is not created equally. When you hop on the scale the number you’re getting back is your total weight including water, bones, all your vital organs, etc. To say that you want to lose weight usually means you want to lose fat, you want to see that number go down, but you’d prefer it if your problem areas went away and you got to keep your lean muscle which helps you to look good and healthy. So what most people are wondering is whether or not this cleanse can help lose fat and make them healthier all around.

The Claim
The claim of the Master Cleanse is that you can lose weight and help detoxify the body by drinking their special lemonade and cutting off all other foods and drinks. This lemonade is supposed to help with the detoxification process, while boosting your metabolism and helping to keep you nourished and sustained despite the fact that you’re not eating anything.

The Hype
This diet gets a lot of attention because it has been used by numerous celebrities to slim down on the quick. Of course many of these celebrities are not exactly role models on how to live a healthy life, but they do get a lot of press because they’re famous. This starts a sort of craze about the diet, and the next thing you know brides are using it to slim down before their wedding day, and others are using before other big events in their life.

The Cost
The cost of the Master Cleanse is relatively cheap compared to other diets and cleanses. Since you’re not eating any whole food you don’t have to worry about preparing those meals, and buying all of the food for them. There’s also time savings from not having to cook and clean up. Your only expenses are the lemons and cayenne pepper and syrup for the lemonade, as well as some peripheral items to follow it exactly. This is one attraction to the diet, the bare essentials are all that’s required.

The Commitment
This is the part that will separate those that are serious about this cleanse, from those who aren’t. It’s going to take some determination to stay with it, especially if you are planning on staying on it for a week or more. Some sources will say that you can use this cleanse for very long durations, even up to a month. This would require a new level of commitment, and seems excessive when compared to 3 days or 7 days, or even two weeks. You basically get to choose your commitment level by deciding how long to stay on it. Consult your doctor before making your final decision.

Evaluation
The draw to the Master Cleanse is that you don’t have to think too much about what you can and can’t eat, because it’s laid out exactly what you can have, which is only a few things, and the rest is off limits. It is this simplicity that has some nutritionists concerned, because it is thought that the lemonade does not do enough for the body to help relieve the feelings of fatigue and hunger that accompany cutting off your food supply.

If you just read a simplified summary of how to do the diet and jump into it, you’ll probably end up flopping, and won’t get any sort of benefit. Common mistakes are not taking it slowly enough at first, and not having a plan for when you finish. If you make adjustments both before and after completing it, you should see better results than if you simply stop eating and start drinking the lemonade.

With so much misinformation on what this cleanse can and can’t do, and what it is and isn’t, we’ve assembled this list of the most common 10 questions regarding it. If you have further questions, drop them in the comment box at the bottom and we’ll get you an accurate answer. It’s what we do.

Does the Master Cleanse burn fat?
There’s no evidence that this burns fat, and there’s no reason why it would specifically burn fat. The cayenne pepper may work to increase your metabolism, and with no food to work on, your body will need to turn to some other substance in order to sustain itself. We could find no proof that it would start burning fat as a fuel source.

Can the Master Cleanse be harmful?
Any fasting program can be harmful if not completed correctly, and there is plenty of room for user error. Since fasting is not something that most of us do on a regular basis, it’s hard to become a “fasting pro” and therefore there is a chance that you might do things incorrectly, or that your body simply won’t respond well to the program. Since the goal here is to help the body to cleanse itself, remove toxins, and lose weight, it is a case of good intentions, but might not always work out in your favor.

Is the Master Cleanse alkalizing?
There has been much discussion as to whether the cleanse helps the body reach an alkaline state. By removing all of the whole foods from your diet and relying on the lemonade itself, you’re cutting down on the amount of acidic foods, but there are no official studies that we could find as to the ability of the diet to help foster an alkaline state in the body. A more reliable method would be a Green Smoothie cleanse, where you’re introducing plenty of green vegetables into the body, which are known to produce a more alkaline condition.

Does the Master Cleanse clear skin?
One hopeful benefit by some users of the cleanse is the rumor that it helps to clear the skin of acne and other blemishes. The thought is that by flushing out toxins from the body the skin should return to its naturally clear state. While there is some anecdotal evidence from some that say it helped to clear up their skin, we’ve seen nothing official that would back this up, and no full explanation as to why this would work in this manner.

Is the Master Cleanse a hoax?
It’s not a hoax, it is actually derived from a book that was published in the 1940’s and re-released in the 1970’s that’s been able to stay in the mainstream consciousness because of its use by celebrities. The cleanse produces measurable results, but has received plenty of criticism because these results are mostly short term, and there are few long lasting positive effects.

Does the Master Cleanse eat muscle?
Your body needs a certain amount of calories each day, and if it doesn’t have food to burn, it has to consume something in order to sustain itself. The hope is that it will burn off excess fat deposits, but there is a stronger chance that it will burn up lean muscle if it’s available. Nothing has been proven either way on this, but many dieticians warn that if you want to keep your muscle, diets of this nature should be avoided.

Can the Master Cleanse get rid of parasites?
This is not reported benefits at most sites acting as proponents of the cleanse. The only possible way it could do that would be because of the cayenne pepper, but we haven’t found anything to support the idea that cayenne pepper mixed with sugary syrup and lemon juice is enough to kill harmful parasites in the digestive system.

Does the Master Cleanse detox the liver?
There is no scientific evidence that the cleanse will detoxify your liver, however if you typically drink alcohol or eat foods that are harmful to the liver, you may give it a chance to take a breather and repair some damage. Sometimes this is enough to feel the positive effects of a healthier liver, but those results will be lost if you go back to your old ways following the cleanse.

Is the Master Cleanse painful?
The most common feeling of pain reported is feeling hungry. This is not something that will be appeased for long by drinking lemonade, but eventually the feeling subsides as you go longer and longer without eating. Some are concerned that if you’re releasing toxins your body won’t respond well, and there is the phenomenon of the body reacting strongly when toxins are flushed out, but there are few reports of this happening when following the recommended timeline.

Does the Master Cleanse slow your metabolism?
Whether or not it slows it, it definitely disrupts it. If you are used to eating your three square meals a day, and then stop eating food altogether, your body is not going to understand what’s going on, and will switch to starvation mode. This could set you up with problems later, when you return to a more natural eating plan each day. You may find that your have stronger hunger pangs, and that you eat more per meal than you did before, especially during the first few weeks of being back to normal.

Final Master Cleanse Review
The real issue here when asking if the Master Cleanse works or not is what do you mean by “works”? If short term weight loss is your goal, you’d most assuredly lose weight in the short term and in a relatively short period of time, but you’re basically starving the body, and the same can be said for that. If you’re looking for a diet or solution that will get you to lose weight and keep it off after the diet has finished, this isn’t it.

Depending on how well you prepare yourself both before and after starting this cleanse, you might see positive results. For that reason we’re giving this our Potential Try rating, but be sure to check with your doctor before starting this, as your medical history might include contraindications to starting any sort of fasting program.

Our Recommendation
If this book had been released recently it would have received a heavy dose of scrutiny and would have needed to back up the claims with clinical evidence of its long term effectiveness, which it does not have. Since it was first released back in the 40s it was able to take hold and develop a sort of cult following, which has resulted in a feeling like it is part urban legend passed on by word of mouth, and part official backed by a book and and dietician.

What do you think? Does the Master Cleanse work or not?

← Previous Does Xzilon Really Make Your Car Shine on a Molecular Level?
⚅ back to blog
Next →Does Zicam Really Work?