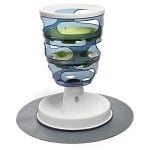 The Meow Maze is a special cat toy that is designed to keep cats entertained and occupied. It uses a system whereby a treat is placed at the top of the unit, and if your cat successfully works the treat to the bottom they get to enjoy it. But will cats really use this?

Overview
Cats are known for being naturally curious, but as they get older it takes more and more for them to get interested in something. When they’re young all it takes is a ball of string or a pen and they can spend several minutes entranced by it. Later on they will likely grow tired of their old toys and seem to be less active than they once were. There are all sorts of cat toys and accessories that are available to make it so cats can play more.

The Claim
The creators of the Meow Maze say that your cat will enjoy playing with it because it is using little treats for them as bait, but keeping it out of mouth’s reach until they get it through the maze and out the bottom where they can play with it.

The Hype
This is one product that is going to have to rely on a good amount of hype in order to sell itself as a viable option for cat owners. There’s no shortage of cat toys, and asking people to spend $30 on a cat toy when they readily go for much less at the pet store is a bit much. In order for this to be considered a good choice it would have to keep your cat busy for awhile.

The Commitment
Since this is a cat toy you basically just put it within the reach of your cat, which is pretty much anywhere. It’s supposed to keep them curious, but you may have to show them how it works the first time so they know that they’re supposed to work the treat around to the bottom to get to it. Once they see that it can come out the bottom it should click for them, much like a rat going through a maze to get to a piece of cheese.

Evaluation
The Meow Maze is designed so that your cat has to bat their treat through a maze in order to get the reward. Any time you involve a treat, whether it be catnip or anything else your cat enjoys, like little kibbles of their food, they will be more apt to give it their attention and follow along with the game.

This is a nice design, although some questions have been raised as to its manufacturing quality. It’s made out of plastic of course, but some users are wondering if it will stand up to repeated use, especially from larger sized cats. Also you have to consider the fact that this is to be used with treats, so your cat isn’t going to be playing with it all day, since you wouldn’t want to keep supplying them with constant treats. This means that they may only get a few minutes of activity with it before returning to whatever it is they like to do.

There’s no real guarantee that your cat will use this, nor for how long they’ll want to keep using it. You can’t really put anything in it besides an edible treat of some sort or they’ll try to eat it when it comes out the bottom. You could put a different toy of theirs in it that is too big to eat and make them work it through the maze until it gets released out the bottom. You’d have to try different ideas until you find something that works.

The Meow Maze is getting our Try rating. It’s a pretty interesting way to keep your cat occupied for a bit, and since they are trying to get a treat they will likely stay with the task until it comes out the other end. You might have to help them along if they don’t quite get it, but the promise of a treat should be enough so that they’ll at least pay attention.

The one concern is on the pricing structure, since you’ll pretty much be stuck with them once you get them. Even if you take them up on the offer they’re still keeping over 50% of the money you’ve spent, not counting what it costs to ship them back. There’s not really a good reason why you’d want two of them anyway, so it would be nice if they would let you opt out of the second unit. This would make it better since you could simply pay the $23 for one and get back $15 if you don’t like it.

Our Recommendation
If you think your cat would enjoy this then give it a go. You know them best and would know if this is something they’d want to use, or if they would just give it a few pats and then be done with it.

What do you think? Does Meow Maze work or not?

← Previous Does the Stove in a Can Really Work?
⚅ back to blog
Next →Does Bake a Bone Really Work?