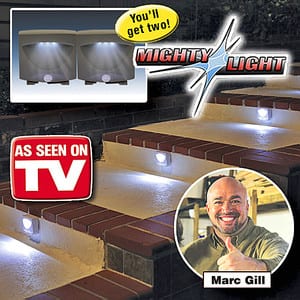 The Mighty Light promises that you’ll be able to put a light wherever you need it, and since its motion activated you don’t have to fumble for a switch, or worry about leaving the light on. These portable lights can be handy because you can put them exactly where you want to, so we looked at whether the quality is there or not, and if this is a good purchase at this price point.

Overview
It seems that in some rooms and spaces no matter how much things are lit up, it’s just not enough. Or maybe you need a nightlight but you’re not keen on the idea of leaving it on all night just for a few minutes of use if you get up during the night. The idea of a motion sensor light makes a lot of sense, since you’re only using it when it’s needed, sort of like the refrigerator light. It makes it very convenient because you don’t have to worry about switching it on and off, which can be nice when you’ve got your hands full or you’re half asleep.

The Claim
The makers of Mighty Light says that these are a hands-free high powered way to light up places of your home that are hard or impractical with ordinary light sources. They say that they’re hands-free because they’re motion activated, so you don’t have to worry about clapping them on or off or using a remote control. They turn themselves off with their built in timer.

They also claim that these are weatherproof so you can use them both indoors and outdoors, wherever you need them and in any conditions. They say that if you use these instead of traditional lighting you’ll end up saving money. They add that these don’t have any wires to them, so you don’t have to worry about wiring them up or some complicated install process. They mention that these would be good in the event of a power outage.

The Hype
At the end of the day we’re talking about a battery powered light, not some magical creation that is going to turn your world upside down. Of course it is a company’s job to make you want to buy their product, but keep a level head on this one because chances are you’ll be underwhelmed if you build this up too much.

The Cost
The Mighty Light is $17, with additional units at $13, and if you buy a six pack you can get them for $10 each, all with shipping included. Keep in mind that you will also have to get the batteries for each of them, with each requiring 3 AA batteries. This also represent an ongoing cost of using these, as you’ll need to replace the batteries when they die.

The Commitment
It’s easy to see that installing these would be no problem. They either stick right where you need them to with double sided Velcro, or you can mount them using the brackets and screws. What this should result in is less dependence on other lights, and an increase in your quality of living if they are brightening up a spot that used to give you trouble because it was in the shadows.

Evaluation
There’s only so many ways they could screw things up with the Mighty Light. In the world of inventions this isn’t going to win any Nobel prizes. But you’d be surprised at how many manufacturers out there skimp on the manufacturing process in order for short term profits. What we’re noticing here is that people are ordering these and then not even receiving them. What’s worse, the people that do get them are saying they don’t provide enough light to see anything with.

The Mighty Light is getting our Thumbs Down, based on their ordering process, the delay from the time they collect your money to the time they ship your order, and the lousy performance of the product once it arrives. That’s three strikes and they’re out of here. This is the sort of set up that gives TV products a bad name, and makes it harder for other companies to do an honest business. If you need some lights like these, why not try out , as it got better reviews and actually fulfills orders.

Our Recommendation
If you saw the ad for this and immediately thought of where you’d use it, it will probably live up to its promises and do the trick for you. Just remember that it uses LED lighting, so it’s not going to be the same kind of illumination that you’d get from a incandescent bulb. Also, consider other options before going with this one, because most reports are stating that they aren’t sending out products in a timely manner.

What do you think? Does the Mighty Light work or not?

4 Customer Reviews on “Does the Mighty Light Really Work?”