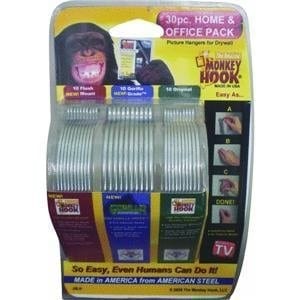 The marketing and branding team at Monkey Hook Picture Hangers may be in need of a biology lesson, as they feature a lot of chimpanzees and gorillas in their efforts, but apes are not the same thing as monkeys. A chimp is closer to a human than it is to a monkey, so showing it being able to use a Monkey Hook is not as impressive as it first seems. If they could show an actual monkey installing the hook that would be a different matter.

Overview
It appears that several companies have got roughly the same idea, and have gone about their manufacturing and packaging in the exact same way. These are shaped to look exactly like Hercules Hooks and their function and design are nearly identical. Perhaps it is hard to patent a curved piece of metal, or maybe they are changing the shape of the hook ever so slightly to avoid being sued and told to cease and desist. Whatever the case, it’s up to you to decide which brand to go with.

The Claim
Monkey Hook Picture Hangers claims that you can install them without using any tools, and that they can hold up 50lbs of weight. This means that not only will you be able to hang a picture, but also very large paintings with ornate frames and even mirrors.

They also say that their Gorilla Grade hangers are just as strong as Hercules Hooks because they use a stronger grade steel. It’s interesting to note that they compare their upgraded version, and not their regular version. Super Hooks say that they are just as good as Hercules Hooks as well, but the grade of metal is not the same, so by their very nature they can’t be better.

The Hype
In their promotional video they show a chimpanzee putting a Monkey Hook into a wall. The only problem with this is that it’s a little controversial using a chimp this way. There have been studies done that concluded chimps should not be used in film like this, and all of the things we ask them to do in order to seem more human-like, such as smiling, or walking upright, are actually painful for the chimp.

The Cost
Monkey Hook Picture Hangers can be purchased for less than $12 at Amazon. That’s for a variety pack of 30 for the home and office. They also have a smaller pack for $10, but we recommend dropping the extra two bucks to be totally covered as far as all of your hanging needs go.

The Commitment
This is one area that they really drive it home that you won’t have to go though as much struggle and strife as you do with traditional ways of getting things hung onto walls. By not requiring the use of any tools, they definitely make a strong case for ease of use.

Evaluation
Monkey Hook Picture Hangers have to work, because the concept is solid. No matter which company ends up making these sort of hooks, they always seem to get good reviews from users. It’s like using the generic brand of cold medicine over the name brand. Since the active ingredients are the same you know it will have the same effect. So it’s really just a matter of picking which one you feel delivers the best value, and at the end of the day we’re only talking about a few dollars, so it’s not a huge choice to make.

We like how they’re committed to helping with autism. This is a highly misunderstood condition that effects children and their families and scientists don’t know what causes it, or how to cure it. With so many companies only interested in the bottom line, it is nice when you see one making strong efforts to make a difference.

The general consensus is that Monkey Hook picture hangers work well, it’s just a matter of finding the right spot on the wall. The instructions help with that, but it might take some trial and error before you get the hang of using them. If you’ve never used anything like these before, you’ll no doubt be impressed by how simple and effective they are. You’ll never look at hanging things the same way again.

Our Recommendation
We recommend using the brand that originally came out, and the one that can hold the most weight without any upgrades: Hercules Hooks. These hooks have caused quite a stir, and they have several different brands of hooks gunning for them. This is because they came in and introduced a new and novel way of hanging pictures and anything else to a drywall surface without ruining the drywall, and without dropping the frame or other items.

What do you think? Do Monkey Hook Picture Hangers work or not?

← Previous Does the Super Hook Really Work?
⚅ back to blog
Next →Does the Ninja Kitchen System 1200 Really Work?