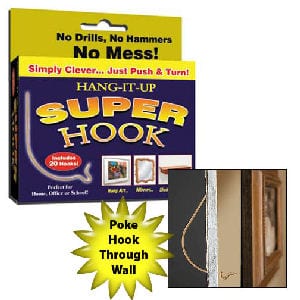 It’s a nail, it’s a hook, it’s Super Hook! So they didn’t spend too much time in the naming brainstorm session, but give them credit for keeping it simple. They say these hooks are a way for you to hang up pictures and shelves and anything else you can think of without using any tools. So just how super are these hooks?

Overview
Who knew that hanging stuff on walls would be such a big business? There are plenty of companies vying for the chance to be your go-to method for hanging things on walls. The biggest features people care about are: how easy is it to install, how reliable is it at keeping things on the wall, and how much damage does it do when you take stuff down? In the case of Super Hooks (and Hercules Hooks, btw) these claim to install in seconds, hold up 80 pounds, and only leave a pinhole when you remove them.

The Claim
Super Hook claims that you can hang up to 80 pounds with them. They also ask you to compare them to Hercules hooks which can hang up to 150 pounds – nearly double. We don’t know about you, but we’d feel better about something that can hang almost twice as much weight on it, so we’re not sure why they’re so eager to draw a comparison. The price is their big selling feature, as no other hooks like these are being sold for so low.

The Hype
The hype is that they are challenging the Hercules Hook, and basically riding off of their marketing efforts by undercutting it on price. We live in a free market society, which is great, but they also say caveat emptor, so be sure that you’re not trading quality for a shockingly low price.

The Cost
Super Hook is going for pocket change over at Amazon, but they tack on a $5 shipping charge which will help them recoup some of that low price because it definitely won’t cost that much to ship them.

The Commitment
The point of using these hooks is to save you time and the hassle of trying to use a hammer and nails to hang all of your hang-ables. If you’re not a handyman or handywoman, you probably have a lot of unhung items that you’re waiting to get around to.

Evaluation
Call us old-fashioned, but we don’t like the idea of a company trying to sell a knock off at a lower price. Super Hook is not bashful about the fact that they are essentially the same thing as Hercules Hooks. They want you to compare it the same way a generic over-the-counter medication asks you to compare the active ingredients to those in the name brand. Only in this case Hercules Hooks are outrageously priced, and don’t try to take advantage of you. Look at how Super Hook has to charge a few cents for their product and then makes up for it with their shipping cost.

The other question is, how were they able to get these made and packaged for such a low cost? Sure, metal hooks can’t be too terribly expensive to manufacture, but Hercules Hooks obviously put some research into the development of them. Shouldn’t they be compensated for that? It’s really a matter of principle, so it’s up to you which one you want to go with. But users of Super Hook have voiced that they wouldn’t trust their favorite picture frames with it, so it’s really a matter of getting what you pay for. Not all metals are created equally, and skimping on production costs usually has consequences that come out in the wash.

The Super Hook might look like a duck and quack like a duck, but in this case it’s not a duck. It not only asks you to compare it to Hercules Hooks, but it basically stole the design and tries to compete on price only. Call us purists but we believe in getting the real product whenever possible. At least you have a reliable company behind the product should you need to return it or reorder.

That being said, those that have bought these have responded favorably to them, and they most likely work for most things you’d want to hang, because most of them will clock in at under 80 pounds.

Our Recommendation
Go with the original, the Hercules Hook. If you don’t, the terrorists win. OK, we’re being melodramatic, but you get the point. If you want the real McCoy and not some cheap imitation then you have to go with the originator, and hey, they toss in a free laser level. Or you can think of it as getting free hooks with the purchase of a laser level, whichever sounds like the better deal.

Other products to consider: Command Strips if you want no trace left behind, and InstaHang if you want a one-touch method of getting the hook in the wall.

What do you think? Does Super Hook work or not?

← Previous Does the Scotch-Brite Lint Roller Really Work?
⚅ back to blog
Next →Do Monkey Hook Picture Hangers Really Work?

14 Customer Reviews on “Does the Super Hook Really Work?”