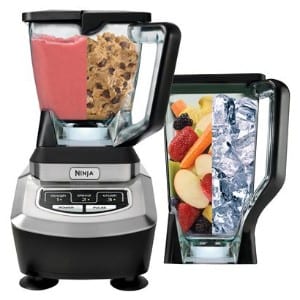 If you want a professional grade blender at a reasonable price, the Ninja Kitchen System 1200 might just be it. If you’re tired of the less than acceptable performance of ordinary blenders but not quite willing or able to get a high end model, you want something that can give you the results you want, consistently, and something that lasts for several years. So should this Ninja model be your next blender, or is there something better out there?

Overview
No kitchen is complete without a high quality blender at your command. So many recipes call for foods to be chopped, diced, minced, pureed, and crushed that you can’t get by without one for long. If you go the cheap route, getting some run-of-the-mill blender you find in the appliance isle at the supermarket, you’ll get mediocre results. If you want something that the pros use, you’ll have to fill out a mortgage application. The Ninja system is designed to bring a top quality blender down to a price most of us can wrap our heads around.

The Claim
Ninja Kitchen System 1200 says that it can not only blend, but also make dough because of the special technology used in its blades. This isn’t just a one-trick pony, it is smarter than the average bear and can control the speed depending on what you need it for. If you’re trying to knead dough it will go at one speed, if you’re trying to crush ice it will go at another. This is one feature that many people seem to miss when they give it a go in their own home.

You’re not short on space with this either, as it has a large capacity 72 ounce pitcher on it, with its own set of features. The lid locks in place, and also has a pout spout making it easier to use for different tasks in the kitchen. You can also swap out a 40 ounce bowl that has the same handy lid. It’s futuristic look isn’t just a pretty face, as the electronic control panel lets you work this with the touch of a few buttons.

There’s also plenty of accessories, so you don’t have to worry about sticking your hands anywhere near the ultra sharp blades. They’ve got a whisk which helps bring foods into the path of the blades, a hook for the dough so you can get it out easily, and a paddle for cookie do so you don’t have to use a spoon that could damage the blades. They also say the parts of this system are safe for the dishwasher so keeping things clean is a breeze.

The Hype
They hype comes from people really enjoying their Ninja blenders, and saying how powerful they are. You even see people mentioning it in their Facebook status updates and on their Twitter tweets. It takes a special product to be able to get an unpaid mention on a social networking site.

The Cost
Ninja Kitchen System 1200 can be found for around $160 depending on which retailer you go for, and what special you can find.

The Commitment
The Ninja should lessen the amount of time you spend in the kitchen, but it should also make the time you do spend more effective. It’s the blender you always wished you could have but never thought you could afford.

Evaluation
Ninja Kitchen System 1200 is well reviewed, not only by critics but also from real users. It’s rare that you see both of them agree on a verdict. Some of the most commonly talked about features are the power and the ability to switch between the bowl and the pitcher. But it’s the power that most people can’t get over, and it only makes sense that this gets so much attention. It is powerful, and when it comes to a blender, a lack of it can lead to less than desirable results, and extra frustration.

Some have said that it lacks some of the sophistication that you find on brands like the Vitamix, but they are also quick to point out that whatever you put in here is going to get pulverized and, well, blended. We know it sounds silly to talk about a blender blending, but once you had so many “blenders” fail to do so, you get a bit giddy when one actually lives up to its name.

When you’re considering the Ninja Kitchen System 1200 you really have to ask yourself if you’re missing out on something better that you just haven’t come across. Nothing is worse than having your new blender for a few months and then finding out that there’s an even better one for a little cheaper that everyone is raving about. We’ve done a thorough inspection to see if anything is giving the Ninja a run for its money. You’ve got the Vitamix, but that is not nearly the same price point. And other blenders that sell for less than the Ninja also offer less in the way of power and features.

This has led us to believe that the 1200 is in a class by itself, and nothing else at this price point comes close to offering the same user experience.

Our Recommendation
If you already have the 1100 the 1200 is not a big enough upgrade to worry about. However, if you don’t yet have a Ninja, what are you waiting for? This is all the blender you’ll ever need at a price that won’t set you back too much.

What do you think? Does Ninja Kitchen System 1200 work or not?

← Previous Do Monkey Hook Picture Hangers Really Work?
⚅ back to blog
Next →Does Lashes to Die For Platinum Really Work?

15 Customer Reviews on “Does the Ninja Kitchen System 1200 Really Work?”