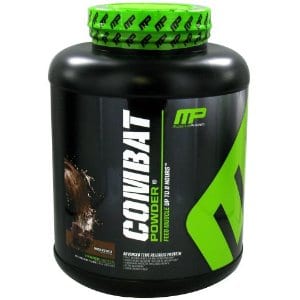 MusclePharm Combat says that you can feed your muscles for up to 8 hours using their time release system. Sounds like a great way to keep your muscles full of what they need so they can repair themselves and give you the size and shape you want. But how well does it really work in the real world, and what are people saying about the results they’re getting?

Overview
MusclePharm is gaining a lot of attention and notoriety within the bodybuilding community for putting up high-quality products. It should be noted that this is a very saturated market, and therefore getting your name out there and building a reputation is extremely difficult. For every one company that makes it to the big time, hundreds of others have tried, failed, and closed up shop.

The Claim
The overriding theme of MusclePharm is that they back their products up with science, and they say that this is where the rubber meets the road. With Combat they’ve put a lot of what you’d expect from a whey protein supplement into it, like whey protein isolate, but they also include items that you might not be familiar with, like partially hydrolyzed whey protein. Don’t mistake this for anything bad like partially hydrogenated oils that produce trans fats. This is a process they use to break the protein down into small particles so it’s absorbed quickly, and your muscles can start benefiting right away.

This is one of the first protein supplements we’ve seen that includes digestive enzymes in it. They claim that this helps your body break down the shake and they say that it can’t utilize what it can’t break down. That makes a lot of sense, and if most of your shake goes undigested, then all of the benefits come out the other end of you and are wasted. They also put in micellar casein, which helps to give it the long-lasting and gradual effect.

The Hype
There’s a bit of hype surrounding muscle building supplements, because some guys claim they don’t do anything, and are just a big sham. Others say that they wouldn’t work out without them. The debate is fueled by there not being a lot of double blind tests, and not a lot of research done on the placebo effect of taking these supplements. The belief level is important, if you think that it is helping you, and helping your muscles, then it probably is. If you’re skeptical, you probably won’t use it as much, and won’t workout as hard, so it’s a self-fulfilling prophecy.

The Cost
MusclePharm Combat is $40 for a four pound tub. That gets you 54 servings, so much less than $1 per serving, making it an economical choice, and a way to supplement the body without going broke.

The Commitment
If you’re going to take this, you’ll want to commit to pushing it hard out in the gym if you don’t already. It can be hard to push yourself past your comfort zone when you’re lifting. You might want to think about finding a workout buddy, or enlisting the help of a trainer that can make sure that you keep going even when your brain and body are saying stop. This is where most guys get tripped up, because they don’t work out hard enough to see the results they really want. The body gets scared and weak when it’s pushed beyond its comfort zone, so you’ll tell yourself “that’s enough” when really you needed to do 3 more reps.

Evaluation
MusclePharm Combat gets smashing reviews, and guys are saying this really works for them. When you consider that most whey protein supplements out there are not on a time release, the difference becomes clear. Your muscles don’t just need help right after a hard workout, they need it gradually over the next several hours and beyond. That’s why it’s nice that this drip feeds your muscles, so that they’ve got a consistent supply, and not just an initial rush and then nothing.

Of course, depending on your protein needs you’ll want to make sure that the rest of your diet is supporting your muscles as well. You don’t want to rely on supplements alone for your protein requirements. That’s why you should be sure to know the protein contents of everything else you’re eating throughout the day, including other supplements you might be taking. Calculate your body’s protein needs and make sure you hit that target each day.

MusclePharm Combat is getting our Thumbs Up review. Reasons cited: overwhelmingly positive peer feedback, long-standing company with a track record of success, and a unique product that adds to features to a protein supplement that we haven’t seen before. By making it time released, and also adding digestive enzymes to help with absorption, they are really raising the bar on what you should expect from a protein supplement.

Our Recommendation
The combination of Combat with the pre-workout supplement MusclePharm Assault is pretty much a one-two punch and you’d have a difficult time not seeing results with them when used in conjunction. Assault makes sure you leave nothing in the gym, and then Combat makes sure that the muscles you ripped up in the gym are able to properly repair themselves. Compared to doing the same sort of lifting without a pre or post-workout supplementing, few could say that the results would be anywhere near the same.

What do you think? Does MusclePharm Combat work or not?