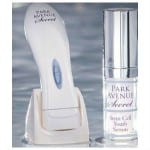 Park Avenue Secret claims to bring anti-aging benefits using a combination of a facial stimulator and serum. But how well does it work?

Overview
Anti-aging products and systems are all the rage these days, with baby boomers trying to recapture their youthful looks, and prevent the slide into looking old. You can expect to see plenty more hitting the airwaves over the next decade.

The Claim
The makers of Park Avenue Secret say that you can see results described as “dramatic” in just 8 weeks. They go on to claim that it was developed by a Park Avenue doctor, which is how it got its name. They make several references to it being clinically proven, and mention a scientific trial, but we were unable to locate any citation for more research into how the study was conducted and what exactly was proven. There are many instances where a study is funded by the company that developed the product, or their research was not published, which basically renders it meaningless.

They specifically state that this has been proven to help with a reduction in how the lines and wrinkles on your face looks. They also say that it helps make dark spots go away, and makes you skin appear less red if you have a problem in that area. The way it does this is by using a combination of antioxidants, retinol, and peptides, which is a pretty common method employed by many other anti-aging and skin care products.

This is a two-step system where you’re using what they call a “beauty accelerator” which looks like an electric shaver at first glance. This is used all over your face and in problem areas such as the forehead. It is meant to be rolled over your face, and its purpose is to make grooves on the skin so that the serum you follow it up with has a better chance at being effective.

The Hype
The hype is built right into this product, both by what it claims, how it looks, and the way it’s marketed. Merely telling someone that your product will make them look younger is a form of priming the pump for an easy sale. This is a market that is desperate to look younger, and will override their logic as long as there appears to be a glimmer of hope that a product will work. Here, they’ve made a pretty strong case that their product will show some results, which should end up making it a strong seller.

The Cost
Park Avenue Secret is $60 and you can pay at once or break it up into three payments of $20. When you consider that other anti-aging products can sell for 10 times as much or more, this seems rather inexpensive, but since you’ll have to keep reordering the serum perhaps they just want that recurring revenue.

The Commitment
You’ll want to use this as directed, and establish a skin care routine that addresses all of your skins needs. It’s important to keep your skin clean and moisturized, especially as you get older. Don’t forget that what you eat and drink also as an effect on your skin, so you should follow a healthy lifestyle if you’re really serious about looking your best during all of your years. The

Evaluation
Park Avenue Secret is taking a bit of a gamble here with their beauty accelerator, but it seems to have paid off. By clicking the power button you’ll have a motorized unit that is meant to stimulate your skin and get it ready for maximum absorption. When you pair that with the serum that’s included, it’s going above and beyond what other product do, and isn’t making outlandish claims like saying it penetrates to your dermal layer.

Because this is attempting to treat a myriad of problems, it has a higher chance of success at getting at least some of them. So if you’re suffering from redness, it might be worth a try on that alone. But it’s the wrinkles and fine lines that will get most people to order, and the feedback on it suggests that the majority of users see at least moderate to acceptable results.

They say that ordinary anti-aging creams only make it to the top of your skin, and are therefore ineffective since they’re unable to penetrate down to the layers that really make a difference. By using a two step process they are trying to make sure that their cream is absorbed into the skin better, and this is what they are referring to as the main feature that separates their anti-aging cream from the others.

Park Avenue Secret is getting our Solid Try, and here’s why: Rather than simply by an anti-aging cream with similar ingredients and wipe it onto your skin in a one-step process, it makes more sense to give this a try and get the benefit of their face roller. At this price the kit is very attractive when compared to other anti-aging systems.

Our Recommendation
Fighting back the signs of aging is something that requires diligence and perseverance. Time is relentless and never takes a break, so you have to bring the fight to it every day. It’s good to have a toolkit at your disposal so that you can be ready each day. Following a system is a good idea, because this means that you’ll have more consistency over time, which makes a big difference in the long run. This product makes a strong case for itself, and at this price is worth trying to see how you respond to it.

What do you think? Does Park Avenue Secret work or not?

← Previous Do Perfect Paws Really Work?
⚅ back to blog
Next →Does the Rover Rake Really Work?