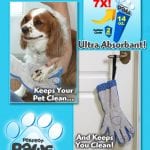 Perfect Paws are a pair of microfiber covered gloves that are designed to help clean up your dog’s paws after they’ve been outside. It says that it absorbs much more than an ordinary cotton towel, so in theory it should be pretty effective, but let’s see how it’s standing up to real world scrutiny.

Overview
It’s a common problem of dog owners to try and clean off their pet’s feet after they’ve been outside, especially if it’s been raining or snowing recently. They can track in all sorts of moisture and mud so it’s much easier to clean their paws before they track it all through the house.

The Claim
The makers of Perfect Paws claim that they are made using microfibers, similar to those on a Shamwow, so they’re more absorbent, and can be washed and reused again and again. They say that in just few wipes you’ll be able to get all of the dirt and water from their paws and they’ll be ready to go into your home or car without getting it all messy. They also say that they’re oversized so that you stay clean throughout the process and don’t end up with mud all over your arms or sleeves.

The Hype
There really isn’t too much hype here, as they haven’t exaggerated the problem, and they haven’t trumped up the product’s benefits either. They basically show a common problem and then offer this as a possible solution. In the world of infomercials and As Seen on TV products this is low key by comparison.

The Cost
You can get one Perfect Paws glove for $17 or two for $24. This is one product where it really does make sense to get two of them. You can have one for both hands for when they’ve been digging in the yard, or you can take their recommendation of keeping one in the house and one in the car so you can clean them up no matter where they go.

The Commitment
This should reduce the amount of time you spend cleaning off your dog’s paws, and could potentially save you the time and hassle of mopping up the kitchen floor, or cleaning off the carpeting if they aren’t tracking a mess around.

Evaluation
Perfect Paws can be looked at a few different ways. It may seem a bit silly to have big gloves to take care of their paws, and it may seem like a rather simple invention, pretty much just terry cloth gloves. But upon close inspection it’s the microfiber that makes these different, and it’s nice that the entire glove is covered in it. This means that every step you take to clean their paws off will be effective.

This product intrigued us because it addressed a specific problem we were having with a dog named Ginger. She liked to go out in the backyard during the winter and dig through the snow and right into the mud. She’d come back in with mud caked all over her paws, all four of them, but the front ones were the worst. It would take literally 10 minutes or more of wiping off each paw, and having to get in between each of her toes. At the time we were just using a common rag like the one you’d use to dry dishes. It was not an ideal way to handle it, and had we seen this ad sooner we would have been able to handle it more easily.

Telebrands is known for their TV products, and the sheer number that they have is pretty amazing. They are always looking for new ideas that help fix a common problem. Many times their products might look a bit strange at first, as these gloves did when we first saw them, but they’re pretty good at bringing to market simple yet effective products that provide just what is needed, and nothing more. That appears to be the case here, and these gloves will make a lot of sense to the right person.

Perfect Paws is getting our Solid Try rating, as it’s a pretty handy product to have around the house, and is better than any other solution we’ve seen for this problem. You can try using an ordinary rag, but that doesn’t do a very good job of soaking up the moisture, or conquering mud. Paper towels don’t work, even the expensive ones that are supposed to be ultra absorbent. You wouldn’t want to use a chamois cloth on this unless you wanted to only use it for your dog’s paws. Having a designated cleaning product makes the most sense, and it’s easy enough to keep one of these by the door for when they come back in.

Our Recommendation
After struggling for months trying to come up with a viable way to get a dog’s paw’s clean, we ended up buying a welcome mat for the backyard and would stop the dog and wipe each paw off on the mat individually. It wasn’t the best solution because it was kind of abrasive on her paws, and you had to rub them again and again just to get mud and rain off of her paws. This solution is much better than the one we came up with, and it’s something that we’d recommend trying if you have a similar situation.

What do you think? Do Perfect Paws work or not?