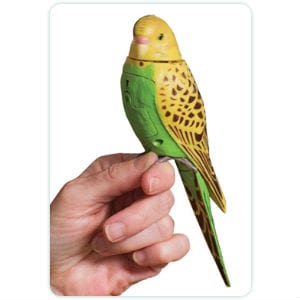 The Perfect Polly Pet may seem like a joke when you first see it, but it really isn’t. This is an actual product that the manufacturer is hoping will provide the benefits described to those that buy it. But can this bird really come anywhere close to a real parakeet without the feeding and cleaning required?

Overview
We’re guessing that they did some market research before giving the green light to this product, and somehow they must have come to the conclusion that bird owners really don’t like changing out the bottom of the bird cage. Surely they must have also tested the reaction that people have when they are first exposed to this toy. Still, it made it to market and now the hope is that people are willing to part with their hard earned cash for a chance to have a fake plastic bird chirp at them.

The Claim
The claims made on the Perfect Polly Pet fake bird toy are that it responds to motion, looks at you, and then chirps when you enter the room, or any other time it sense motion. They refer to it as a replica, and they say that it is able to look and act like a real parakeet.

The Hype
This has been dubbed “The Saddest Toy in the World” by BuzzFeed, which seems to wrap up the sentiment by the public at large. They say all press is good press, but it seems most are just getting a laugh out of this, and not really taking it seriously.

The Cost
The Perfect Polly Pet is sold as one unit for $22 or two for $29, bringing your per bird price down to $14.50. There’s no good explanation given as to why you’d want a second bird. If they are near each other they might be able to trigger each other with their head movement and tail feather shaking so that they never stop chirping. Maybe you know someone that would want to go in on it with you so you can get the reduced pricing. Keep in mind that if you return it within the 30 day window you’ll only get the $15 back and they’ll keep either the $7 shipping for one bird or the $14 shipping for two birds.

The Commitment
Compared to owning a real parakeet there are some benefits, like not having to buy bird seed, not having to remember to refill the water dish, and not having to clean out dirty newspaper from the bottom of the bird cage. But the same could be said for the Pet Rock.

Evaluation
OK, seriously, let’s see how the Perfect Polly Pet actually works, and whether or not it’s something a person would enjoy. If you saw the infomercial once, watch it again. Notice that the bird only makes ONE sound, that this sound does not in fact sound like a parakeet. Rather than choosing between any number of tweet sequences, it simply makes the same sound over and over and over again. The reason that parakeets are the most popular bird when it comes to having a bird as a pet is because their birdsong is so beautiful, and they mix it up a lot so it doesn’t get annoying.

The sound that this makes cannot be likened to singing. They give you ample opportunity to judge for yourself in the infomercial:

Also, they say that the bird tilts its head and shakes its tail feather, but buy their own video evidence it barely shakes its feather, and turning its head is the only move it does. This would have been a slightly better product if they would have given it a few more traits than what it has. Even ten different bird chirps, and a few extra movements would have done wonders. But they expect you to take this seriously when all it is is a plastic bird that makes one highly annoying sound, and does one somewhat authentic movement.

Perfect Polly Pet is getting our Thumbs Down as far as it working to recreate the benefits of having a bird as a pet. Sure, it doesn’t come with the drawbacks of pet ownership, but sometimes you have to take the bad with the good to get the good. It’s a little depressing to think that a human being would perch this on their finger and find it as fascinating as a real bird, or get some feeling of companionship from it.

Our Recommendation
This should not be used as a substitute for bird ownership. If you think that it’s cute and you’re aware that you’ll likely have to switch it on and off or risk becoming completely annoyed by it, go for it. Other than that we remain quite skeptical that this would bring anyone anything but the briefest moment of joy.

What do you think? Does Perfect Polly Pet work or not?

24 Customer Reviews on “Does the Perfect Polly Pet Really Work?”