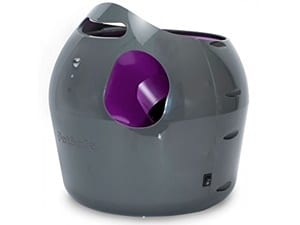 There are tons of interactive toys on the market that can be utilized between the dog and his owner but the most favorite normally is the ball. Now ball throwing has never been easier when you use the Petsafe Automatic Ball Launcher as it makes this pet fun all the more enjoyable.

Overview
The Petsafe Automatic Ball Launcher is a convenient and easy way to get your dog some exercise and to save your throwing arm from becoming ruined by tossing the ball for you.

The Claim
The claim is that by using the Petsafe Automatic Ball Launcher you will greatly increase the amount of fetch that your dog can enjoy by literally taking the ball out of your hands.

The Hype
The hype surrounding the Petsafe Automatic Ball Launcher and other products that make playing with your animal easier and more efficient is offset by the other side of the coin who argue that by removing the necessity of the owners involvement you are not really playing with the animal. All that aside, it certainly allows the dog to get more exercise even when the owner is unable to get a game of fetch going.

The Cost
The cost of the PetSafe Automatic Ball Launcher is $149.95 at Amazon.com. While this may seem excessive, remember you are paying for an item that will allow your dog to get a good workout and have fun while doing it while you can sit and watch them play.

The Commitment
There is not much commitment required for the Petsafe Automatic Ball Launcher, you simply set it up and the launcher does the rest.

Evaluation
Aside from the concerns mentioned above about the pet owner not benefiting from the exercise realized from actually playing fetch with their dog this unit is actually a whole lot of fun for the pet and the owner. Watching the dog chase the balls that are launched automatically and by motion sensors is a great way to let the dog get his much needed exercise and is a great source of amusement for the owners. The dog has the opportunity to continue launching the balls simply by moving in front of the sensors. The sensors also know when it is an animal and not a person walking in front of the unit and there are safety mechanisms in place so that anyone walking by does not get beaned by a ball. There are 9 different setting for the launcher and you can also set the degree of angle you want the ball to launch on so that the ball is not continuously being launched over the fence or into the pool. You can also adjust the force with which the ball is ejected; you can set it for between 8-30 feet of distance. The sensor will know whenever anyone is within 7 feet of the unit and will not launch in those instances.

All in all a great way to let your pet get their much needed exerciser without having to submit yourself to the repetition of tossing a ball endlessly in the yard or park. Of course if you prefer to get that involved you can always simply toss the ball yourself. We are going to give the Petsafe Automatic Ball Launcher a thumbs up rating.

Our Recommendation
As stated previously, we would recommend the Petsafe Automatic Ball Launcher for anyone who would prefer to watch their pet play fetch with themselves or for anyone who for any reason cannot play fetch or simply likes the idea of a ball launcher for their dog. It does make for a very fun outing for the dog and can be quite humorous for the owners. We don’t want to forge about our cat lovers so you may want to take a look at the Meow Maze.

What do you think? Does Petsafe Automatic Ball Launcher work or not?