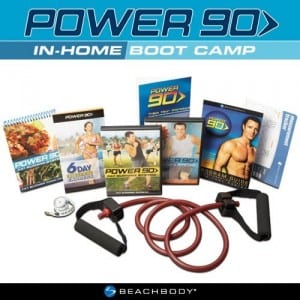 Power 90 says that it is an at-home bootcamp that you can put yourself through, along with the help of host Tony Horton. You might recognize him from several other workout programs, including P90X. This system is supposed to come with everything you need to either get your fitness back on track, or to help you lose weight and build muscle at the same time. But how effective is it really, and should you get this one instead of the more advanced programs?

Overview
Power 90 is the precursor to the massively popular P90X and the follow up system P90X2. Even though it’s somewhat old by today’s standards, it still has a lot of sound fitness principles in it, and is a fantastic place to start if you’ve tried out the more advanced programs on the market and weren’t able to keep up the pace. It’s also a good way to learn the fundamentals. But don’t think that it’s not intense at all. In its day it was considered intense, but by today’s standards more of an entry-level workout program, with some intense parts to it.

The Claim
Power 90 says that you can transform your body in 90 days, and they guarantee it. They do it with a series of six different workouts that are designed to give you both a cardio workout and a muscle building workout as well. This combined approach is where the magic is, because the cardio will help you shed the fat, and the strength training helps you build lean muscle underneath, so your results come more quickly and you stay motivated.

The Hype
This program was a success on its own before they upped the ante by coming out with P90X and pushing that on tons of infomercials. Now it is still available, but most of the focus is on P90X, and its sequel. It’s good that you can still get it, because for some people it’s a better program to go with, based on ability level, and your overall goal.

The Cost
Power 90 is a total of $73 which includes shipping. This makes it less expensive that some other programs out there, which is impressive because it’s still a very comprehensive kit, and comes with everything you need to get started, and is also covered by a 90 day guarantee, which covers the entire length of the program so you can try it in its entirety.

The Commitment
You need to commit to a full 90 days if you want to see the results that are promised. That’s where it gets the 90 in its name from. Many workout programs ask you to commit for a period of time, some as little as 2 weeks, with many at the 30 and 60 day marks, and the more intense programs asking for 90 days. You should do this at a time when you know you don’t have anything coming up that will cause you to stumble, preferably away from vacation time, and away from the holidays. You don’t want to sabotage your success.

Evaluation
The nice thing about Power 90 is that it’s intense, but it’s not too intense. Plus, the host always tells you to go at your own pace, which is a little easier to do with this than it is with some of the other programs. In all actuality you don’t have to push your body to extremes just to get it to lose weight. Some of the other programs are targeted at getting a cut, or ripped body. If you just want to get into really good shape, and you’re not as concerned with gracing the cover of Men’s Health, this would be a good option.

The important part to remember is that you want to choose something that you can stick with. It doesn’t make sense to set your heights too high on a program that you can’t keep up with that will only frustrate you. By setting goals that are high, but not lofty, you have a better chance at sticking with them and seeing them through. Once you have a series of successful goals reached, you can move the mark higher and higher. That’s why we like this program because it’s a good entry point into the more advanced systems. You can always push yourself further later, or you can bask in the glory of completing this one program.

Power 90 is hosted by Tony Horton, and if you’re a fan of his, you’ll probably like him in this as well. We’re giving the program our Thumbs Up rating. It stands the test of time because it was really before its time. The workouts in it are still effective, and aren’t just fluff or something someone just dreamed up. It was developed by Tony Horton, and before he created this he was a celebrity fitness trainer with a long list of familiar names. It’s something you can trust will get the job done if you follow along and show up every day for three months.

Our Recommendation
Even though this spawned two follow up programs, it was originally released as a standalone workout program that can turn your body around in 90 days. It’s still a great way to get in shape, and if you’ve tried P90X and it was a little too intense for you, this might be a better place to start, as it’s not as extreme.

What do you think? Does Power 90 work or not?

← Previous Does My PC Backup Work?
⚅ back to blog
Next →Does Dream Water Really Work?