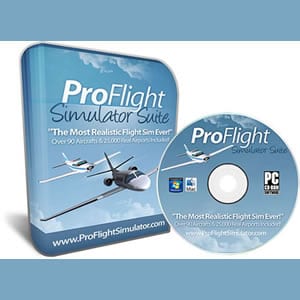 If you’ve ever wondered what it would be like to fly a plane, even a commercial airliner, you might have considered trying Pro Flight Simulator. It’s a flight simulator that isn’t for one of the major gaming systems like Xbox or Wii, this one is played right on your computer, using the keyboard for controls. Proponents of the game say it’s great, and definitely recommend it, but some naysayers say it’s not all it’s cracked up to be, so which is right?

Overview
Flight simulators have been popular for many years, and the most popular of which has been the one from Microsoft. Who hasn’t dreamed of what it would be like to fly a plane, without all of the responsibility and accountability if you screw up? What a thrill it would be to feel a plane leave the ground, knowing that it was in your control. What a view you would have as you soar through the sky and see distant objects move closer and closer to you. To be above the clouds with nothing in site for miles and miles. And to have no need for a rear view mirror! Can a video game or a simulator really capture this experience?

The Claim
They say that Pro Flight Simulator is the most realistic flight simulation game ever created. They say they accomplish this by using real world imagery for the terrain, as well as real world aircraft, airports, and scenery.

Pro Flight Simulator also claim that it’s the next best thing to being up there. If you’re a pilot, or have a hobby of flying planes, you probably look for ways to replicate the experience. While nothing is going to match the thrill of flying, if you can get the sights and controls down, you’re off to a pretty good start.

The Hype
The hype is that this game is very similar to Microsoft’s flight simulation game, Flight Simulator X and that’s where a lot of the comparisons come from. People want to know which one is better.

The Cost
They say that it usually retails for $100, and that you can get %50 off, but these type of products always seem to inflate the “normal” price in order to create a sense of urgency. That being said we think the price is usually $49. There is, however, a deluxe version of the game that is $97 which gets you all of the world scenery, greatly enhancing the experience.

Tip: You can get the deluxe version for $20 less if you try to close out the window, but then opt to stay on the page.

One thing that is unique about this software, is that you will be able to try it out for a full 60 days and get your money back if you don’t like it. Try doing that with an Xbox game.

The Commitment
You don’t have to make too much of a commitment, other than installing and playing the game. If you’re a fan of flight sim games, or just flying games in general, you’ll probably have no trouble losing several hours to this one.

Evaluation
They’ve tried to mimic a lot of the controls you’d see on a real airplane, as well as the functions and cause and effect type of actions you can make while you’re in the cockpit. This includes things like system failures, and instrument failures, that you’ll have to figure out how to contend with in order to safely fly and land the plane.

Certified pilots will even have to admit that some of the situations it presents you with are true to life. It might not have you prepared to take over the controls of an airplane if you’re ever in that typical movie situation where the pilots get killed or are unconscious and the flight attendants ask people on the plane if anyone can fly this thing, but it can provide hours of enjoyment.

We like that you can install Pro Flight Simulator on as many computers as you want, which is great if you have more than one computer in the house, or want to try installing it at work. It also supports several different controller options case you want to take it a step further in realism.

When compared to its biggest rival, Flight Simulator X, Pro Flight Simulator is blow for blow just as good if not a little better. The two are very similar as far as the controls go, and how much time you can spend playing each one. But PFS excels at offering plenty more airports, tons more planes, and much more scenery, which is really what makes the game enjoyable. The fact that you get free updates for life with it is icing on the cake. Unlike with FSX where in classic Microsoft fashion they are always coming out with a new version, but making you pay for each one as they’re released.

Our Recommendation
If you’re going to try it, you might as well opt for the deluxe version for a few dollars more. It’s got plenty more scenery, which means you can get more use out of it before getting bored. No matter which way you go, you’re covered by the money back guarantee, so there’s no point in not picking it up and putting it through its paces to see if you like it. If you do like it and want to keep it, it’s a reasonable price, seeing how you get free updates, so you don’t have to worry about buying future versions.

What do you think? Does Pro Flight Simulator work or not?