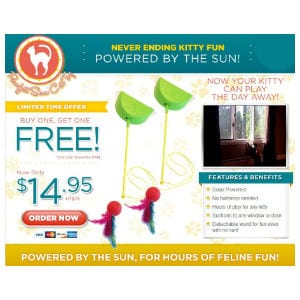 The Purrfect Cat Toy is a solar powered wand with a that is supposed to keep your cat busy by mimicking the type of playing you’d do with the same stick. But how much will a cat really play with this, and will they stay interested in it for long?

Overview
A cat’s day just isn’t complete without a little playtime. They need the exercise and it helps with their natural instincts of jumping and pouncing and having good coordination. But it can be a bit tedious playing with a cat, as they always seem to need you to really try to make the toy look like a mouse or a bird, or at least something they haven’t seen before.

The Claim
The makers of the Purrfect Cat Toy say that you can stick it to any door or window and when the sun hits it it turns right on. They say it has a quiet motor so you don’t have to worry about it making too much noise and driving you crazy. They say that cats will play the day away with it. This may all sound well and good, until you remember the basic temperament of cats.

The Hype
While it’s true that cats need physical activity each day, it’s also true that they get bored easily and you have to keep things interesting for them. That’s what makes it so tricky to find a toy that doesn’t involve you, but that will keep them excited. Frankly there’s just nothing that will hold their attention indefinitely, it’s just not in their nature.

The Cost
The Purrfect Cat Toy is listed at $15 but you might be surprised later when the total cost jumps to $31 after two $8 shipping charges are tacked on. This is set up this way to serve two purposes: first it inflates the total price because who really needs two of these? Next, it cuts down on the number of people that will bother returning it, since you only get half your money back. This also reduces the amount lost in the event of a return, from the company’s standpoint. So they end up making more, and giving back less, not a bad setup – for them.

The Commitment
This is where they try to make the case that their product requires very little in the pay of participation on your part. You don’t even have to turn it off or on, as it’s powered by a solar panel. They do mention that you can take off the wand and use the toy manually, which would come in handy on rainy days or times when you want to connect and bond with your kitty.

Evaluation
The Purrfect Cat Toy flops on a few different levels. They’re putting stock in this being solar powered, but having this going all day may get kind of annoying for you the pet owner, and kind of dull in a hurry for your cat. Cats like to think they’re playing with something that is playing back. When they see that this just repeats the same loop there’s a chance they might stop playing with it. They don’t seem to like to repeat themselves too much when it comes to playing.

Even when you’re in control of the toy and are doing your best to engage them, they’ll lose interest in whatever toy it is over time. That means that when your cat gets bored and walks away you’re going to have this non-stop toy going on and on. We see a very low likelihood that your cat will play with this for long, especially if they’re a bit older. Younger cats and kittens might have more fun with it, but once they figure it out they’ll move on just like with any other toy. That’s why there’s no need to invest this much in a cat toy, no matter what you get them they’ll eventually grow tired of it.

Purrfect Sun Cat Toy is getting our Risky Try rating, because it seems to be at a silly price of $31 for a cat toy you would only return on a matter of principle. You can buy several toys for your cat for that price. These toys don’t seem to be made to such standards as to command such a price. Their solar poweredness is not enough to justify the price, and even acts to take away more than it provides, from a features standpoint.

Our Recommendation
Take a pass on these and get your cat a collection of better made toys that you need to be involved with. Your cat doesn’t need to play all day, they just need a good 5 minute session, and it makes a great bonding experience with you.

What do you think? Does Purrfect Cat Toy work or not?