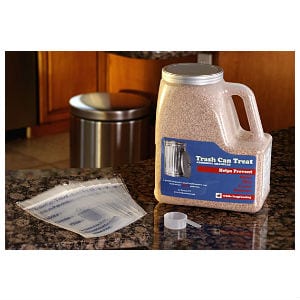 Trash Can Treat are granules that you add to your trash can in order to prevent odors as well as add a fragrance to the air. They make some pretty bold claims and this is supposed to have been tested in the real world for years by restaurants, so let’s see what the offer is like and if it’s worth it.

Overview
In millions of homes across the country there is likely a stinky garbage can, or at least one that could smell a little better. It’s just a fact that garbage smells like, well, garbage. Garbage bag manufacturers like Hefty and Glad have tried adding scents to the bags over the years, but those typically just make it smell like pretty garbage, and you can still smell the garbage lurking behind the nice smell.

The Claim
Uni-Kem, the makers of Trash Can Treat say that the granules act to absorb odors and moisture in the air, while at the same time releasing a pleasant cherry aroma. So it’s not simply a cover up, and it’s not only a neutralizer, it’s working on two different levels at the same time. They say that this has been used nationally be restuarants, and it appears that they do sell a commercial version called Dumpster Treat.

The Hype
The reason this product has such a high chance of success is because odorous trash cans are an almost universal problem. Most people would be interested in learning about a cost effective way to not have to smell those smells anymore, and proof of that is in the hundreds of millions of dollars Americans spend on air fresheners and room deodorizers each year. It’s big business.

The Cost
Trash Can Treat is $35 for a 7 pound supply, which includes shipping. They say that this can hold you over for 3 months if you’re using their time release bags. Most would agree that a little more than $10 per month is worth it not to have to smell the trash smell any more.

The Commitment
Once you have this in place you really don’t have to do too much. Since there are different ways of applying it, the ease of use varies a bit, but it’s never any harder than filling a bag with the granules. And for tougher odors it gets even easier to use by just having to pour it directly on the offending materials.

Evaluation
Trash Can Treat is good to have in the home because it seems there’s always something trying to stink up the place. Once you have a tub of this handy you’ll find plenty of different ways to use it. The fact that it’s been used in commercial applications is proof enough that this can knock out some of the toughest odors around. Think of your average dumpster and how much odor it emanates. They’ve shown how Dumpster Treat can take a dumpster from being stinky to actually smelling good. That’s quite a feat. They’ve simply taken those same granules and repackaged them under a consumer-friendly title, since few people need 5 gallon buckets of the stuff, or have a dumpster to worry about.

Since they say this is powerful enough to get rid of pet smells like litter boxes it’s definitely taking on some of the biggest offenders possible. When you consider that restaurants produce some of the stinkiest garbage around, and they’re using this to clean up their dumpster smell, you know that it’s a product that you can count on. This is no ordinary TV offer where they’re trying to sell a product they just invented. This is a legit chemical company that is in the business of making products that help to keep things clean and smelling nice.

Trash Can Treat is getting our Solid Buy rating, as it provides plenty of product at a reasonable price, has been shown to work, and can be very helpful in plenty of situations. There’s also a chance that you could stretch this out and make it last longer, or that you might go through it more quickly than three months. But that just means that you have more applications for it, perhaps you own pets or have other uses for it. Bottom line, if you’re using more of it you’re probably happy with the way it’s working and won’t mind buying it again.

Our Recommendation
This is something that basically everyone could benefit from in their house, and if you’ve made it this far you’ve probably already thought of half a dozen ways you could use this. At this price point there’s not really much else out there that attempts to neutralize such strong odors. Even something like Febreze with its patented way of covering up odors still has trouble with some of the foulest things out there.

What do you think? Does Trash Can Treat work or not?

← Previous Does Super Rope Cinch Really Work?
⚅ back to blog
Next →Does the Purrfect Cat Toy Really Work?