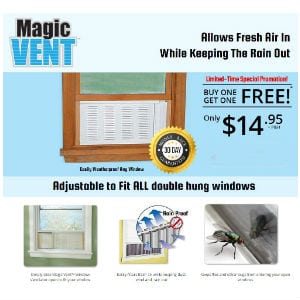 The Magic Vent says it can keep the breeze coming in while keeping rain and moisture out. That means you can keep your window open through different types of weather and not have to worry about things getting soaked in your house. But how well does it work?

Overview
If you’ve ever had to reluctantly shut your windows during a rainstorm, you’ll appreciate the value in a product like this. Often when it rains there’s a nice breeze that comes with it along with the rain. In the summer months this can cool things off and make it so it’s a few degrees cooler. But when you have to shut your window or risk having the rain blow in it can be pretty frustrating. That’s why we were all ears when we heard of this product because we wanted to see if it works or not.

The Claim
The makers of Magic Vent say that it’s better than using a screen because screens get worn out over time and don’t block the rain and wetness from coming in. They say the louver design makes it so that rain gets turned away, while still allowing air to flow freely, so you get what you want, and not what you don’t. They say it also keeps bugs out of your home, and that you can weatherproof any window in seconds.

The Hype
The reason there is hype behind this is not just because they are running TV promos for it, but because it attempts to solve a problem that many homes have across the country. This means that if it works people are more likely to pass on this information to their friends, and if it doesn’t it’s going to generate a good share of disgruntled customers.

The Cost
The Magic Vent is listed at $15, but wait, there’s more. There’s shipping that must be paid that amounts to $16. That brings your order total to $31 and you end up getting two of these vents. That’s about $15 a piece, delivered to your door. Not a bad price point, but you have to consider that in the event that you return these you’ll only end up getting that original $15 back. So a lot of the risk is on you the consumer, since you’ll also have to pay extra to ship them back if you want that refund.

The Commitment
All that it takes is putting these in place in the windows that you have in mind. They say it can fit most any double hung window, and that it installs in seconds without the need of any tools. Once it’s in place it’s pretty much set it and forget it until things get too cold outside and you’re ready to close the window during the winter.

Evaluation
The Magic Vent is a really simple invention, and one that a lot of homes could benefit from. There’s no reason to believe that it doesn’t work, since it’s a basic concept, doesn’t have a lot of moveable parts, and doesn’t have any motorized or electronic components to it. It’s basically a plastic cover that goes in your window. However, when you look closely at the model, it appears like there are a few pieces of custom woodworking on either side of this to make it seem like it’s fitting flush with the window. It would be interesting to see this in action, like to be able to watch someone install it in just seconds with no tools, as they say you can do.

Magic Vent is getting our Risky Try rating. There’s too much left to the imagination as far as how to install this, and when the winter months come it could get rather annoying to use this instead of using a screen. When you have a screen it’s just a matter of opening the window to let the air in. When you have to rely on this it’s going to involve installing and uninstalling it whenever you want to let some fresh air in during the cold months.

Also, it’s set up so that it doesn’t make a whole lot of sense to return it in the event that you don’t like it. You’ll be spending more than you get back on this one, and the company won’t mind crediting you when they are keeping the larger part of your order total.

Our Recommendation
This may seem like a good idea at first glance, but when you look at what they’re selling, and thing about how it would work once you get it home, you’ll see that there are better options, including doing what you’re already doing when it rains. We just can’t see this working as properly as it would need to in order to provide the benefits it says it can.

What do you think? Does Magic Vent work or not?

← Previous Does the Purrfect Cat Toy Really Work?
⚅ back to blog
Next →Does Fun Buns Really Work?