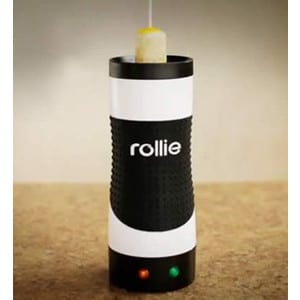 The Rollie EggMaster is like a toaster you’d make toast with, but instead of using bread you use eggs and they pop up when done.

Overview
The debate over whether eggs are good for you or not has been going on for quite some time, with the current consensus being that they are, including the yolk, as long as you eat them in moderation. But finding ways to prepare them can be something of a challenge. There are dozens of different egg cookers out there that can help you get hard-boiled eggs, but this product is saying that you can make eggs that are plate-worthy in a fraction of the time as before.

The Claim
The makers of the Rollie EggMaster say that you’ll be able to cook eggs faster, and with easier clean-up when using their product. They also say you’ll be able to cook them without using oil or butter, so they come out healthier than they do when cooked with more traditional methods. They also say that the cylindrical shape makes them easier and more fun to eat, since you can add different ingredients to them and have it spiral through the eggs.

They say you can use this at the office, on the road, or in the dorms because of its small size.

The Hype
The infomercial exaggerates, or should we say eggs-aggerates, just how hard it is to make eggs. Yes, it’s not the most convenient thing to do, but after a bit of practice you could consistently make eggs without having them turn out to be a total mess.

The Cost
The Rollie EggMaster is $48 when totaled up, which is $30 for the base unit, $10 for shipping, and an extra $8 for the bonus chopper. This is a bit pricey in the world of egg cookers, but since you’re able to do more with it, and since there isn’t anything else quite like it, they may be thinking they can charge more for it.

The Commitment
This is a kitchen device that should be able to reduce the amount of time spent making yourself a meal with eggs. Keep in mind that the more intricate the types of eggs you’re wanting to make, the more involved a process it’s going to be. If you’re happy with just a standard egg white/egg yolk style egg, you’ll be all set. But to make the most out of it you’ll have to commit to prepping other ingredients, like veggies and meats for an omelet, or separating the yolk if you just want egg whites.

Evaluation
The Rollie EggMaster is a way to cook your eggs pretty quickly, but you’d have to like them hard boiled if you want to use it as easily as is shown in the commercial. This is because if you simply drop the eggs in and have them cooked you’re going to end up with a big block of egg whites and a chunk of egg yolk. If you want them omelet style you’ll have to take the additional step of blending up the eggs, which will require dirtying at least one other dish. They do include a recipe book to help make sure that you don’t run out of ways to use it.

This is a relatively new product to the market, so there isn’t a lot of hard data on what users think of it. You’ll want to watch out for “reviews” of the product that are nothing more than pages put in place trying to get you to click through and buy it. One such “review” states that you need to read it before buying, but turns out that it’s just an affiliate site trying to get you to buy, and there’s really nothing on it that needs to be read before making a buying decision.

We’re giving the Rollie EggMaster our Try rating, even with the inflated price due to the chopper, it’s likely not a bad buy if you’re a frequent egg eater, or want to be. The trick is that they’ve figured out how to cook the egg uniformly and vertically, so you’re cooking the egg from all sides, the same way a George Foreman cooks foods on both sides to speed things up. There are a few things to be aware of before you buy:

They have a 1 year limited warranty on it, but nowhere could we find a money back guarantee regarding its use in the first 30 days, the way you see with most products. If they do back it with a 30 day guarantee, you’d only be getting the $30 back from the original purchase price, and be out $18 plus return shipping costs, and only a veggie chopper to show for it. This makes it somewhat risky for the consumer, and it would be nice if they could explicitly state whether the product is guaranteed. A guarantee and a warranty are not the same thing.

Our Recommendation
This would be a fun gadget to have in the kitchen if your family eats a lot of eggs, or you want to cook eggs more but currently don’t because of the hassle. We’ve done several reviews on different egg cookers, and this is by far the most novel invention we’ve seen, and brings a unique method of cooking your eggs. If you can wrap your mind around eating eggs in tube form, you’ll likely be happy with them.

What do you think? Does Rollie EggMaster work or not?

← Previous Do Bee Pollen Pills Really Work?
⚅ back to blog
Next →Does the Pearl Hair Remover Really Work?