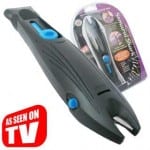 Samurai Shark is a product that many home cooks would consider to keep all of their cutlery well-sharpened. Billy Mays can make anything look like it works, but how about this one? Does it really work, or will your knives be just as dull as they are now?

Overview
Many people might think that it’s dangerous to be using very sharp knives. Using a dull knife is actually more dangerous in the kitchen than using a properly sharpened one. This is because a dull knife will slip from foods more often than a sharp one. A sharp knife will do what you intend it to do, and provide more precise cuts the way you intend them to go.

The Claim
Anything with a cutting blade can be made razor sharp by using the Samurai Shark.

The Hype
The hype comes from infomercial legend Billy Mays, who shouts the many benefits to using Samurai Shark, and makes a believer out of previously neutral viewers. This is one product that is not particularly glamorous, there’s not a big wow factor when it comes to sharpening blades, but somehow it’s given a bit of pizazz by the marketing engine behind it.

In the commercial they have a nice little sound bite of what seems to be a samurai sword coming out of its sheath. It is important to note that this is just some audio effects, and your Samurai Shark will not make this particular sound when used at home.

The Cost
As you’d expect, they can’t charge too much for the Samurai Shark. You can buy one from Amazon for less than $5. So not a very big outlay of cash in order to try it out, but there’s no need to go through the hassle of buying it if it doesn’t work. So let’s evaluate the product and find out if it’s worth an Abe Lincoln.

The Commitment
If you’ve never really sharpened knives, scissors or other cutting tools before, you’ll have to resolve yourself to keeping them sharp going forward. This is a habit that some people will have to get into, but if you’re already comfortable using a regular sharpener, you will likely find it easier to use a Samurai Shark.

Evaluation
The unit itself is pretty straightforward. It’s all self contained, and has a dual sharpener at the top for you to run the knife blade through. On the other side they have a one-sided sharper for blades that won’t fit through the dual blade. This lets you use it on nearly anything with a blade.

If you’ve ever used a conventional knife sharpener, you know how awkward it can be to try and run the blades along it. It can even be a little dangerous for first time users and takes some getting used to.

The Samurai Shark even works at sharpening things like scissors. You might not have ever thought about sharpening a pair of scissors, you would just replace them. But they probably just need to be sharpened, not replaced, so this product can be thought of as being a green product as it helps you throw less things in the garbage and use them longer.

Because of the handy size and grip, it’s easy to use Samurai Shark. It’s ergonomic, which gives you a better feeling of control. Being in control is always a nice thing when you consider that you’re handling knives.

With just 3 passes through the sharpener, you can make even an extremely dull knife more sharp, so yes, the product works as shown. If needed, you can repeat the process to get your knife to the desired sharpness. No matter how many times you need to run it through, you’ll eventually get a nice, sharp knife and be able to re-sharpen it as needed so you’ll always have the proper tool in place in the kithcen.

Our Recommendation
If you use your cutlery often you’ll want to get yourself a Samurai Shark. It’s dirt cheap and makes sharpening blades a lot easier. It can make it safer and save you time, and even money by extending the use of the knives and other cutting tools you already have.

What do you think? Does Samurai Shark really work?

← Previous Does Slap Chop Really Work?
⚅ back to blog
Next →Does the Magic Bullet Really Work?