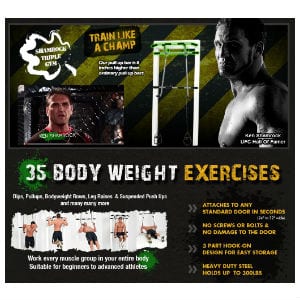 The Shamrock Triple Gym is a three piece workout system that is designed to hang on a door and allow you to get a full body workout at home. We’ve seen pull up bars like this one before, but not ones with so many attachments, so let’s see what makes this thing so special and if it’s worth buying.

Overview
A good workout at home has become something of a myth of urban legend. You assume that somebody somewhere has been able to get in shape without the use of a gym or a really expensive at home workout machine. The sad truth is that most people that by at-home workout equipment never use it, and it just becomes a demotivating reminder that they bought something and didn’t do what they told themselves they’d do.

The Claim
The makers of the Shamrock Triple Gym say that you can do a total of 35 exercises with the different pieces of equipment, and that they’re all geared towards using your own body weight to maximize the muscles that get the most looks. They say you can work out every muscle group in your body.

The reason it’s called triple is because it takes your normal pull up bar, adds an extension to it, and then goes a step further than that to add suspension straps so you can do suspension exercises, one of the hottest new exercises you’ll see people doing in gyms and paying a ton to have a personal trainer walk them through it.

The Hype
The hype comes from this being promoted by Ken Shamrock, billed as the first MMA fighter to be accepted into the UFC Hall of Fame. Turns out he shares this honor with Royce Gracie as they were both inducted back in 2003 as the first members. With an endorsement like that it’s hard to ignore this unit as a legitimate way to get in shape in your own home.

The Cost
The Shamrock Triple Gym is $88 if you pay for it all at once, which includes shipping. They have a payment plan set up if you want to spread it out over a few months. In that case you pay $58 on your first payment, which includes the shipping, and you pay $40 a month later, for a total price of $98. They say there’s a 10% discount available by liking their Facebook page, although we were unable to locate it after liking their page. There’s also a bonus pack that you can add on that has DVD workouts, a calendar, and ab straps so you can do leg raises on this.

The Commitment
No matter which exercise machine you get, you’re going to have to use it if you want to see results. Your job is to pick one that looks like it has the highest likelihood of being used by you on a regular basis. If you look at this system and you see yourself not using it, then don’t think that this will change once you get it. But if you really feel that you will use it, and follow their program, then it means you have the commitment needed to follow through with the workouts.

Evaluation
The Shamrock Triple Gym started with a pull up bar that attaches to any door. We’ve seen these before in products like The Total Gym. They’ve finally cracked the code on door units like these, and they go in place and stay put without having to install them. The extending bar that comes down allows you to do dips, which hits your tricep, the biggest muscle in your upper arms. The suspending straps allow you to suspension exercises which provide instability that your muscles have to deal with in an attempt to keep you stable through the range of motion.

When you’re using your own bodyweight, it can be really hard to do any exercise at all at first. You have to pay extra attention to your mindset, and make sure that you stay positive, even if you try to do one pull-up and struggle to do even that. Because it’s using your own body weight, it gets easier as you use it, and slim down, and soon you’ve got less weight to lift, and bigger muscles to lift it with, which allows you to do more reps which gets you that ripped look that we’re all shooting for.

The Shamrock Triple Gym is getting our Solid Try rating. They’ve really provided you with a solid workout system that has everything you need to get started, and to start building real muscle. It may take a little getting used to, and you’ll have to build up some trust that it’s not going to come crashing down when you’re suspended on it, but once you get over that it’s designed to have you doing the exercises that yield the most muscles for your time spent.

Our Recommendation
This would be a great at-home system to use if you are looking to get the kind of body they are promising. Since there aren’t any weights involved, and it’s basically gravity working against you, you don’t have to worry about dropping anything heavy on yourself, or pinching your finger on big weights. Plus you can do suspension exercises, which is pretty much the killer app this provides: suspension exercises at home.

What do you think? Does Shamrock Triple Gym work or not?

← Previous Does the Perfect Quesadilla Really Work?
⚅ back to blog
Next →Do Fresh Sticks Really Work?