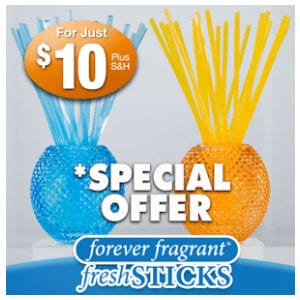 Fresh Sticks are presented as a new way to keep you home smelling good, even in the places that smell the worst. The kicker is they’re supposed to last for two years, which is quite a claim, so let’s see if they can possibly pull this off.

Overview
Foul smells are a part of life, and as they’ve eloquently illustrated they can come from all sorts of places. The diaper pail, the litter box, the bathroom, the garbage bin, and anywhere else where things can really turn sour. Usually it involves removing the source of the offending odor, or waiting for enough time to pass, or opening a window, or trying to cover it up with a potpourri or air deodorizer.

The Claim
The makers of Fresh Sticks say that they’re using plant based, all-natural materials so you won’t be using harsh chemicals and won’t have to worry about what you’re inhaling. But the biggest claim is that these are supposed to last up to two years without needing to be replaced. The reason this is such a big claim is that no other air freshener on the market claims nearly this long of a time, and we haven’t seen a substance yet that can stay fragrant for two years, so it’s something of a new technology if you want to call it that.

The Hype
A scent that can last up to two years conjures up thoughts of the Everlasting Gobstopper from Willy Wonka. If you can let your guard down and accept that there may be a chance that it could still exude a fragrance after 730 days then it stands a chance of making a sale.

The Cost
The cost of Forever Fragrant Fresh Sticks starts at $10 but jumps to $24 when you factor in shipping. If these can really last two years, that breaks down quite nicely at $1 a month, which is less than you’d expect to pay for air fresheners and room deodorizers. You can easily spend far more than that buying things like Febreze and other odor eliminators, so the cost doesn’t seem bad as long as it can go the distance.

The Commitment
All that’s needed on your part is to place these in a location that needs to have better smelling air, and you’re done. Since it doesn’t use oils or gels, and doesn’t plug into the wall, you can can put them wherever you need to, and simply forget about them. They’re decorative so someone might not even know they’re air fresheners, and if they do it’s an elegant looking air freshener so it’s not as obvious as having a plug in unit in your wall.

Evaluation
Using plant based materials in Fresh Sticks was a great idea. Did you know that Febreze is patented because it works by covering up odor molecules with Febreze molecules? That means when it’s working you’re breathing in all of those Febreze chemicals. It makes much more sense to use all natural based air fresheners so you don’t have to wonder what it is you’re taking into your lungs.

The thing about a new product hitting the market saying it can last 2 years is that there’s no way to prove it can or it can’t without a time machine. This means you’re going to have to take a bit of a risk on it if you want to buy it, and hope it can last for as long as it says. Look at it this way though, even if it only lives up to half of its claim and lasts for a year, that still only brings the monthly cost to $2 which is still likely less or about the same as what you’re paying now to freshen your home.

Overall, Fresh Sticks is getting a 50/50 rating from us, because there’s just no way to determine how long the scent will last. And since the only way this becomes a good deal is if it lasts more than a year, we can’t even say whether or not it’s worth buying. The pricing structure makes it so you’re paying mostly for shipping, which is usually not a good thing to do because it means you’ll only get back the original $10 in the event of a return. The thing about this product is that it has a 30 day guarantee, but is supposed to last 2 years, so there’s a high chance that it will still be working in that first 30 days.

Our Recommendation
If you find that you spend much more than $1 a month on air freshening products, it’s worth trying out these sticks to see how long they’ll last. Since they’re new to the market, no data exists on whether they actually do last for two years, and won’t exist until two years from now.

What do you think? Do Fresh Sticks work or not?

← Previous Does the Shamrock Triple Gym Really Work?
⚅ back to blog
Next →Does the Comfy Core Pillow Really Work?