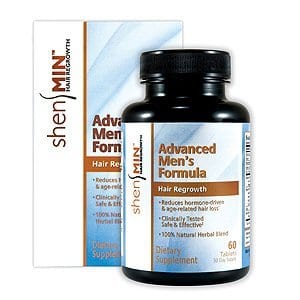 Shen Min claims that it is an all natural way to stop your hair loss because it combines Chinese medicine with modern science. This is a trend we’ve been seeing recently where companies are taking traditional remedies but making them more effective by backing them up with more scientifically proven methods. But have they cracked the code with this product line, or is it all talk?

Overview
It’s long been a habit to say that something is of ancient Chinese origin when you want to add a bit of aura or mystery to a product. There’s something about knowing that an herb has been used for thousands of years and has stood the test of time. But it’s become such a buzz word that it’s hard to discern whether or not there is any validity to the claims of effectiveness. Many times there is also not a lot of scientific research done on these remedies, so it comes down to word of mouth assurances and people testifying as to the results.

The Claim
Shen Min says that their products are natural, and that they specifically help to stop your hair from falling out, and also to help it regrow. They say that this is done by blocking the DHT which they say is to blame for your loss of hair. They say an overproduction of DHT is a problem effecting both men and women, and that it worsens as we age. There is some debate in the hair loss community about what causes hair loss, and a lot of debate as to whether it’s DHT that is responsible for it.

The Hype
Anything that says it is the key for hair loss, and comes from Chinese medicine is going to have some hype to it. This is because almost every product for hair loss will find a willing buyer, and for some reason people are drawn to Chinese remedies, endowing them with a certain belief that they must work and that they’ve been kept a secret all these years.

The Cost
Shen Min is $38 for a one month supply of the men’s and women’s advanced formula. They also have shampoo available for $11, and DHT blockers available for $43, so it’s really up to you how many additional products you want to add on, and how much you’re willing to pay to turn your hair loss around. This are not bad prices, and are in line with other competing products.

The Commitment
It says right on the bottle that if you want to see the best results that you should commit to taking this for at least three to four months. This is the number one stumbling block for people looking to get relief from their hair loss. They let it get to a breaking point and then are too impatient with the results. Even though you might think it has, since you’re subjective, the problem has likely taken months or years to develop to the point of right now where you’re motivated to take action. So get the mindset of being in this for the long haul.

Evaluation
Shen Min is getting mixed to positive reviews from those that try it. The overriding consensus is that you have to give it time to work, and then it gives decent results. It seems that most of the negative reviews are coming from those that didn’t use it for very long and gave up hope. The positive reviews all say that it did take a while to notice the changes, but once the 4 month mark and beyond came, they were able to see the sort of results that were claimed.

It’s funny when you see individual reviews, because some people are blatantly not following the directions, yet give it a bad review. For example, it says to take these tablets with meals and to give them 3-4 months for best results. But you’ll see people say that they’ve gotten no results and that this is a bad product that doesn’t work, and then state that they only took half the dosage on an empty stomach and only for one month. That’s why it’s important not to delve too deeply into single reviews, and look at the overall feedback.

Shen Min is doing a good job of blending the old with the new, and we’re giving it our Try rating. If you use the different products in conjunction with each other, you’ll likely get the best results, but if you only choose one, we’d go with the Advanced Formula. This is a way for you to make a strong effort in stopping your hair loss, and potentially bringing it back. Sitting by and doing nothing is not a good game plan, and neither is giving up altogether after trying several different products.

Our Recommendation
These are worth a try if you’re sure that DHT is the reason for your hair loss. Anything that is all natural and reasonably priced is worth a trial run. Three months is about as long as you should try any product before giving up on it. Be sure to take before and after pictures so that you can objectively note any changes in your hairline. A lot of times you might give a product too much credit due to the placebo effect, or not enough credit due to forgetting how bad things used to be.

What do you think? Does Shen Min work or not?