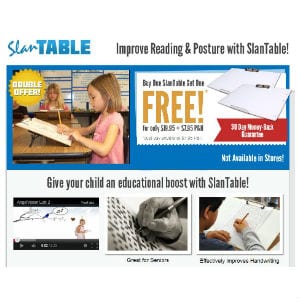 The SlanTable also known as the Visual Edge, is basically a board that has an angle to it that is supposed to make it easier to read, study, and write. The idea is that if we all had the proper angle to our workstation we’d be able to be more effective. So let’s see if this is actually the case.

Overview
If you’ve ever struggled to retain what you’re reading, or if you have trouble focusing on the task in front of you, it may not have occurred to you that the angle at which you’re holding your book or resting your arm could be the reason. At least that’s what the folks behind the Visual Edge slanted board would have you believe. This can really go two ways, either it really does make a difference or it’s just a way to try to get you to buy a board.

The Claim
The makers of the SlanTable say that it can enhance yours or your child’s comprehension while reading because it reduces the amount of fatigue on the eyes. They also say it helps with penmanship and can even reduce the amount of cramping experienced in the wrist. They also say that it can improve your posture because you don’t have to hunch over any longer to see what you’re reading or working on. They claim there’s science behind the design of the board.

The Hype
At the end of the day this is just an angled board, so further proof needs to be made that it can actually do what it says. They rattle off statistics of how many dyslexic people there are in America, as if to suggest that using this board will correct that problem. They also mention the number of people that have vision processing problems, as if to say that if they would just slant their workstation their problem would correct itself.

The Cost
The cost of the SlanTable is $36 and you end up getting two of them for that price. They start with a price of $20 and then charge two $8 shipping charges for each board. That means you’re paying $18 per board, and maybe you only need one, but you end up with two and there’s no way to order just one.

The Commitment
All that you would really need to do is start using this is put it in front of you when you’re reading, writing, or doing anything else of a similar nature. It’s a pretty low commitment level so you can start using it pretty easily, without it really effecting your current lifestyle.

Evaluation
They say that the SlanTable doesn’t have a 22 degree angle by accident. It’s put at that angle because it is a good angle for both reading and working. They say that architects continue to work on a slanted surface, but last we checked architects work on computers now. They then point to calligraphers as proof that an angled surface is best to work on. But unless you’re a calligrapher you might not find enough use for a board like this.

There are some features to the board that try to add to the benefit of having one, like a removable plastic tray at the bottom that could hold a writing utensil or make sure that your things don’t fall off the board. This tray is removable if you need it to, like if you were drawing or had an oversized object to put on the board and needed the extra space. They say it’s made out of a dry erase material so it doubles as a dry erase board. It’s also magnetic, so you can use magnets to place notes on it.

Overall, the SlanTable should be able to do its job, but the real question is how often you or your child would actually use it. They mention that this might be a good product for kids and seniors, and we’re guess it’s because that’s two groups that spend the least amount of time on a computer, and do arts and crafts and practice handwriting. It might be worth getting if you have a specific task in mind for it, but we’re still a little skeptical that this can solve any major learning disabilities or visual acuity problems.

Our Recommendation
At its core this is just a whiteboard that you could buy at just about any office supply store, the only thing is that it has legs on the bottom that give it its angle. Keep in mind that it will only be able to provide that 22 degree angle if it’s on a flat surface and you are sitting directly in front of it. That’s why it seems kind of odd that the “science” is in the 22 degree angle because that would require some rather rigid reading habits in order to hold that angle consistently.

What do you think? Does the SlanTable work or not?

← Previous Does Strap Secret Really Work?
⚅ back to blog
Next →Does the Soothing Wrap Really Work?