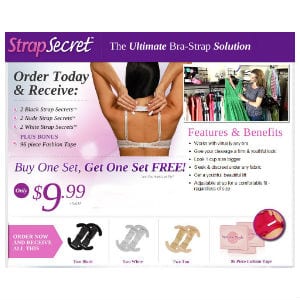 Strap Secret is an attachment that goes on the back of your bra to pull the straps in so that you can wear certain tops without revealing your straps. If you can relate to struggling with your straps at inopportune times, this probably caught your attention so the question is does it deliver or not.

Overview
Strapless bras have been on the market for quite some time now, and they usually get paired with tops that show off your neck and shoulders so that you don’t have your bra straps showing. There are also push up bras that are designed to give you added lift and display your cleavage in the best light. This is trying to address both of those concerns with one product, so let’s see if it actually does what it says it can do, both hiding your bra straps and accentuating your bust.

The Claim
The makers of Strap Secret say that all you have to do is put their clip on the back of your bra straps and it will keep your straps pulled in so that they can’t be seen. As an added benefit they say it makes it so your breasts appear bigger, giving you the appearance of a larger cup size.

The Hype
The hype is that this has its own infomercial to entice you to buy it. The only problem is if you watch closely you’ll see that there’s just no way that the shirts they’re wearing would conceal the Strap Secret unit itself. It becomes evident that there isn’t anything under the shirt when they’re claiming it is under there, because when they show the unit with no shirt on it’s taking up a large part of the model’s back. There are only one or two shirts that they show that this might actually work on.

The Cost
Strap Secret is listed at $9.99 but the actual total price comes to $22 when you factor in the two shipping charges of $6 each. They mention several times that there’s a guarantee for this, but when you consider that you’ll only get $10 back from the $22 you spend, it becomes clear that even if they do have to credit you back they’ll still be making a profit on your order.

The Commitment
They say it’s easy enough to put this on, but it will require you to reach back and put it on. This may require the use of a mirror at least the first few times you do it until you get the hang of it. You’re supposed to be able to slide it up and down to adjust to the shirt you’re wearing, but when this happens it only slightly changes the placement of the straps, yet another failure.

Evaluation
The premise of Strap Secret is that it can conceal your bra straps, but they do not make a convincing case for its effectiveness. When they show it in place it is barely pulling the straps out of the way, and it is merely relocating them higher up towards the neck, which would only work with a tops that cover that part of your body. There are only very specific tops that would be able to be used with this, and we don’t see any way that it would be able to work with the criss cross straps they show on their home page. Unfortunately with a product like this it would be too easy to just have no bra on in the after pictures.

They also say that it boosts your cleavage somehow, but we can’t see any way that it would be able to do that just by cinching your bra straps. They also don’t mention how uncomfortable it is to wear this and have your bra straps go where they’re not designed to go. Overall, this product just has some fatal flaws to it, and makes claims that it doesn’t explain. Compounding the issue is their flimsy guarantee that even if you took them up on would net you less than half of your total purchase price.

Strap Secret is getting our Thumbs Down rating, as it’s pretty clear it doesn’t work. Even their promo video for the product couldn’t successfully show it working, and only in certain instances like with specific tops would it be able to provide any benefit. The claim that changes the way your cleavage looks is also confusing, and they do not explain how it does this.

Our Recommendation
We recommend against getting these unless you wear a lot of tops that have the exact shape that would cover the Strap Secret device, and your relocated bra straps. Strapless bras are still coming out on top in this one, and that’s what we recommend when you want to wear a top that would show off your bra straps.

What do you think? Does Strap Secret work or not?

← Previous Does Popcorn Magic Really Work?
⚅ back to blog
Next →Does the SlanTable Really Work?