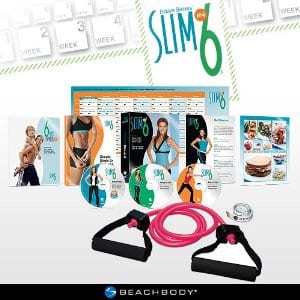 Slim in 6 says that in just 6 weeks – that’s a month and a half for those keeping score at home – you can have the body you’ve always wanted. It’s hosted by Debbie Seibers, whom users have said is pretty good at keeping you motivated. But can an at-home workout program really promise guaranteed results in 6 weeks?

Overview
Wanting to lose weight and get slim is great, but wanting to have it done yesterday can cause a problem. Good health is so important that you don’t want to rush it, or get in a mentality that you should have achieved it by now. It should involve a slow, sustainable, steady march towards what you want. So keep in mind that once the 6 weeks is up, you should still continue on with your workouts, either with this, or graduate into a more intense program.

The Claim
Slim in 6 says that you’ll be able to lessen the size of your midsection, as well as slim down the rest of your body including your thighs, hips, and flabby arms, in six week’s time. It says it does this by providing three distinct workouts. The first one is an introduction to how to do the basic moves and works at burning up calories and getting the process of reshaping your body started.

The next step is taking it to the next level with exercises that burn even more calories, so you see more results in less time. The last phase is where you’ll really push things to the limits by focusing on toning your body as well as continuing to slim it down.

The Hype
Debbie Siebers was smart to pair up with Beachbody for this fitness program. They are great at releasing hit after hit in the workout DVD market, and rarely do they get it wrong.

The Cost
Slim in 6 is $73 which they break down into $33, $20 and $20. This is one of the lower-priced DVD workouts released by Beachbody, yet it still has all of the high production values, like crystal-clear DVDs, on-screen prompts to keep you on track, and accessories like the resistance band. Not a bad deal, if you’re looking for an all-around program for quick results.

The Commitment
You’ll have to stay committed for the full 6 weeks if you want to see the results that they promise. Let’s put this into perspective: six weeks might not sound like a long time, but it’s 44 days, or a month and a half, but if you look at it as being just a fraction of the 52 weeks that are in a year, it doesn’t sound like much. Most people can get their head around sticking with something for six weeks, and this seems to be a good trade-off from the programs out there that promise results in 30 days, which doesn’t seem like enough time, and other programs that say you see results in 90 days, which can be pretty tough to stick with.

Evaluation
Slim in 6 seems to be striving to keep things simple. There aren’t a ton of different workouts so you don’t get overwhelmed by how many choices you have, and they even include a book to guide you through the process so you don’t lose your focus. They also give you an eating guide so that you can avoid eating the bad foods that are inhibiting your progress. There’s also a calendar included so that you can help frame your mind around this six week challenge.

Some people might think it’s a little chintzy to include a tape measure in the package, but it’s not a bad idea to take objective measurements of yourself from time to time. This can help you determine whether or not the program is working for you, and is much more reliable than looking in the mirror everyday. Most people will get discouraged when they don’t see the visible results in the mirror, but if they would only stop to take a look at how far they’ve come, it it would help to motivate them to continue on. Taking before and after pictures is also a great way to make sure that you don’t take your results for granted.

We recommend against going with their six-day express diet plan that comes as a bonus. They say that you’re guaranteed to lose 6 pounds and 6 inches during your first six days. This is too much, too fast, and is not sustainable, and not something that you should start off with when you’re gearing up for a six-week program.

Their other bonuses are great, however, their cardio core express introduces new ways to get the ever important core muscles, including the abdominals. The resistance band that comes with it is good at building muscle, which helps to burn fat even while you’re sleeping.

Slim in 6 has resoundingly positive reviews, which is unusual for a fitness program. Usually you’ll have a nice mixed bag of feedback because it’s typically dependent on people’s ability to stick with a program long enough to see results. In this case, it seems they got the time frame correct, and the majority of people are able to stick it out and see their body start to transform.

Our Recommendation
This seems to be a winner and we’re recommending it for those that need a beginner’s level workout program, or that want to see results quickly if they’re trying to fit into a wedding dress, bridesmaid’s gown, or other event. Most people have been able to stay on track for the 6 weeks needed to see results, and after that you might even stick with it as part of your new fitness routine.

What do you think? Does Slim in 6 work or not?

← Previous Do Grout Steam Cleaners Really Work?
⚅ back to blog
Next →Does Mozy Really Work for Online Backup?

2 Customer Reviews on “Does Slim in 6 Really Get You Fit?”