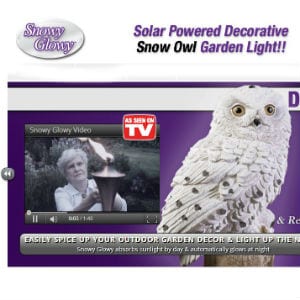 Snowy Glowy is a plastic owl that is meant to go in your garden or other outdoor area as a decoration, and also as a light source. Most people are wondering whether or not this emits enough light to make any difference, and whether it looks good or not.

Overview
It’s hard to decorate things outdoors because you want something looks good, but also serves a purpose. It also needs to be able to withstand the elements of rain and wind and sun exposure. This is a tall order for many outdoor products, and many fail to live up to expectations.

The Claim
The makers of Snowy Glowy say that it doesn’t require any batteries or electric cords because it charges from the sun and then lights up at night all by itself. They also say it acts as a deterrent for pests because a snow owl is a natural predatory and this mimics it so it keeps critters away. They say that the light inside it will last up to 100,000 hours.

The Hype
This product relies on its own mini infomercial to try to sell it, and they talk about it as if it’s the most wonderful product ever created. Really though, it’s a plastic bird connected to a solar cell. It’s not exactly rocket science or anything amazing that has gone into this product, but of course they need to come up with reasons why people would want to buy it.

The Cost
This is sold on a 2 for 1 just pay shipping offer, which boosts your order total to $24. But the big question is why would you want two of these things? One is most likely all that is needed in order to both decorate and add light to your outdoor areas. Maybe if you saw one of these for $10 at a retail store it might be worth it but taking on $14 in shipping just doesn’t make sense.

The Commitment
There is a very little in the way of commitment on your part here, since this doesn’t require batteries, and it doesn’t require you to plug it in, or turn it off and on. In that respect it’s a good product that you don’t have to think too much about.

Evaluation
The Snowy Glowy is one of those products that makes you wonder why it got the green light, when there are likely several useful products that don’t make it to market. There must have been a roundtable discussion on this and a consensus was had that said there’s a market of buyers for this.

They say that this can work to keep pets out of your garden, but it’s unlikely that a pet would be scared off by this, as an owl doesn’t light up, and also moves, so there’s little reason to believe that this is going to ward off any garden pests. They try to talk it up like it’s precision crafted, but it’s obviously just pressed plastic, likely made in China for pennies.

They also say that this can help light your path at night, but even when it is shown in its promotional video it doesn’t look like it’s illuminating anything to the point of helping light your way when walking at night. Anytime we see a product that can’t even look like it works in the video that is trying to make the sale, it leads us to believe that it wouldn’t be a winner once you get it home.

In all likelihood you’ll see these being sold on the cheap in the As Seen on TV section of retail stores, so you can skip out on paying the shipping charges and just buy one if you only want one. Here they’re basically inflating the total price by tacking on that second bird, and the’re making it so if you return it you’ll only get a $10 credit and the company will pocket the $14 less whatever it actually costs to ship these.

The Snowy Glowy is getting our No Go rating, based on the price point of $24 for a pair of plastic birds, and the fact that they are not very attractive, and having a light up bird doesn’t really make a lot of sense. It’s not as if you are going to try to read by this light, or use it as a useful lighting, it would just be for decoration.

Our Recommendation
This might look cute at first glance, but when you consider what it would really be like to have it in your yard, you’d probably be disappointed. In addition to that, you’ll probably wonder why you had to pay an extra $7 for an unnecessary second plastic bird.

What do you think? Does Snowy Glowy work or not?

← Previous Does Instaflex Really Work?
⚅ back to blog
Next →Does Liberty Lantern Really Work?