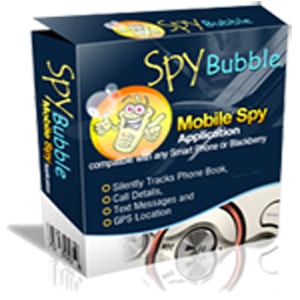 If SpyBubble works you would have a window into some of the most personal aspects of anyone you’d like. Most people use their phone as their lifeline, storing all of the contact information that have for everyone they know, having intimate phone conversations, texting private messages to each other, and even surfing the Internet and making purchases. By accessing their phone data, you would be able to paint a pretty accurate picture of the kind of person they are.

Overview
A lot of spyware exists out there, and can be used to track all sorts of things like keystrokes on a computer, Internet activity, and more. But few people are even aware that cell phones can be hacked and someone could be monitoring your activity. This could be used for good, such as a parent keeping tabs on their child, or an employer keeping their employees honest. It can also be used for bad, such as a jealous or suspicious partner trying to catch the other being unfaithful, even with no grounds for the suspcion.

The Claim
SpyBubble claims that you can find out if your partner is having an affair, and you can check in to see if your child told the truth and went where they said they were going. They also say that you will be able to have a window into your employees’ life so you’ll know what they’re really doing when they call in sick as a way to have a day off. They even say you can check to see if one of your friends are lying to you.

They also say that their service is undetectable by the other party, and that if you upgrade to their premium version you will be able to listen in on actual calls. Because this can access all of the information someone might have on their phone, this includes photos, and text messages that are automatically logged and held in the phone’s memory. This can contain photos and sexting type messages that they never thought anyone else would see. A lot of people even password protect their phones to prevent others from being able to access their personal information.

The Hype
The hype is that this would involve some pretty sophisticated software hacking to get into a person’s cell phone and sync it up so that you could eavesdrop or access the phone’s data without them knowing.

The Cost
The cost of SpyBubble is $50 for the standard version, and $85 for the deluxe version that gets you the ability to listen in on calls made with their phone. For this price you are able to add as many phones as you want, but you will have to have their phone number, as well as a unique code that is imprinted on the cell phone itself.

The Commitment
You have to commit to setting up the software for it to work, but you also have to commit to digging for all of this information, analyzing it, and deciding if it is something to get upset over. It can be very time consuming trying to keep up with someone else. You have to be careful you don’t lose yourself in the process.

Evaluation
A big question is whether this is the best use of your time. Instead of running around playing detective with your significant other, why not try to improve your relationship to the point where they would never even consider being with anyone else. Instead of having to keep tabs on your child, invest time in teaching them to be trustworthy and understand that you care about them and need accurate information on their whereabouts, not because you’re overprotective, but because you want them to be safe.

The way SpyBubble works is by relaying the information stored in a person’s phone over the Internet and onto your dashboard in the member’s area of your account. From there you can browse through it all, so after you install it on their phone you don’t have to worry about getting their phone from them again. To install it you will need to visit a certain website address in their phone’s Internet browser, and SpyBubble will autoinstall on their phone. They say that it is undetectable once it’s installed, so you’d just have to make sure you take the web address out of their history.

SpyBubble seems to work, but only with a certain number of phones, and only when those phones are connected to the Internet. If the person you are targeting doesn’t log on to the Internet with their phone on a regular basis, you will have a serious lag in the data you receive. Some people are calling it a scam, but most likely it’s because they tried to use it on a phone that wasn’t supported, or the target doesn’t use the Internet often enough, or at all.

Our Recommendation
Spend your time more productively and proactively. The only reason you would need to spy on someone is because you’re already mucked things up, and are trying to see if your past mistakes are causing you current problems. Instead of perpetuating the past, take a fresh start approach with whoever you’re suspiciuos of, and try to be the best partner, parent, or employer you can be. By putting a positive energy out, you’ll get positive results back. Spying represents a really negative energy, will not give you the peace of mind you seek, and will only lead to more, and stronger, negative feelings.

What do you think? Does SpyBubble work or not?

← Previous Does Prayer Work?
⚅ back to blog
Next →Does The Belly Burner Really Work?

4 Customer Reviews on “Does SpyBubble Really Work to Spy on Someone?”