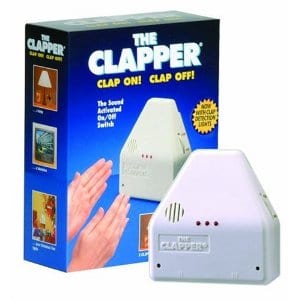 The Clapper is one of the most famous As Seen on TV products, and made it into mainstream culture with their “Clap on, clap off, The Clapper!” jingle. They’ve made improvements on it over the years and it’s still available to buy, but how well does it work?

Overview
The main audience for this are those that don’t want to get out of bed in order to turn off the bedroom lights, and those that want to be able to quickly turn on the lights when they get home without fumbling in the dark. At first it sounds like a great idea, but the more you think about it the more you see that it might not work out so well in the real world. What happens when it picks up noises that are similar to a clap? You guessed it, lights out.

The Claim
The makers of The Clapper say that it is a sound activated on/off switch that can be used for anything that has an electrical cord. You could use it to turn off the TV when you’re ready to go to bed, or you can have a lamp plugged into it in any room of the house and you’ll simply have to clap in order to turn it on. They also brought up the possibility that it could thwart a burglary attempt of a loud noise was made and the lights came on.

The Hype
The commercial was all the hype this needed back in the 80’s. Everyone knew the song, and it would end up in popular culture left and right. It still gets referenced from time to time whenever the 80’s are talked about. This is a classic infomercial, dramatizing the problem, showing the product working perfectly, and not showing any possibility that it might not work according to plan. It’s an example that is followed to this day, and one that must provide results or they wouldn’t keep using that formula.

The Cost
You can find the original Clapper for less than $20, and they have an advanced version The Clapper Plus, for $30. Since this should be a one-time cost it doesn’t seem like too much, but what’s interesting is many people have made mention of the quality of the unit, saying that it’s not well-made. Since you’re talking about an electrical outlet, you really don’t want to bargain shop on this.

The Commitment
Once you plus it in your job should be done, and in theory you can just start clapping to turn whatever it is you want on and off.

Evaluation
There are some inherent flaws with The Clapper, and the reviews it gets point them out. If you’ve got dogs in the house it could become a nuisance to have the lights or other appliances go on and off when they bark. Others have pointed out that they believe it’s a fire hazard due to poor manufacturing.

It’s interesting to note that The Clapper had already been invented by a character in a TV show a decade earlier. The problems with it were the fodder for comic relief in the episode, so the writers of the show obviously figured out that it wasn’t exactly the perfect invention it first seems.

But to their credit the makers of The Clapper haven’t sat idly by, they’ve attempted to revamp the product and solve these flaws. For one, they’ve given it a remote control on recent models so you have more than one way to turn things on and off. They’ve also added a setting so that you have to clap three times before it turns off. This third clap means that it’s less likely to go off when it’s not supposed to, but would still be susceptible to dog barks and other loud repetitive noises.

While The Clapper may have enjoyed a good run back in its day, it seems that now we’re able to let each other know whether something works or not. Back in the 80’s with no Internet you basically just had the commercial to go on. Now there is plenty of feedback on both the good and bad features of The Clapper, with enough data to suggest that you likely won’t be ecstatic with your purchase.

Our Recommendation
You may want to look into The Clapper Plus, which comes with a remote control and adds the ability to make it work on 3 claps instead of two, reducing the number of false positives. However, the feedback on this has been less than stellar, with many people saying it doesn’t last very long before breaking. Seems like it might be a better idea to just avoid the whole thing altogether, it’s time has passed and there are better options available now.

What do you think? Does The Clapper work or not?

← Previous Does Cure It One Wipe Really Work?
⚅ back to blog
Next →Does Fix-a-Flat Really Work?

501 Customer Reviews on “Does The Clapper Really Work?”