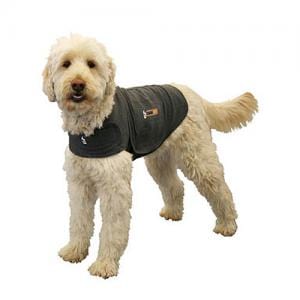 The ThunderShirt is designed to help dogs cope with things like thunder and lightning by applying a little bit of pressure all along their midsection. It’s like giving your dog a gentle and consistent hug, which as you know usually calms them down. So can this take the place of the reassurance you have to give them during these anxiety causing episodes? We look into what people are saying about their ThunderShirt experience.

Overview
Dogs can get anxious from all sorts of things, like fireworks going off in the neighborhood on the 4th of July or New Year’s, or a thunderstorm – which is where it gets its name. Some dogs can’t handle being left alone, and others don’t like going for trips in the car. It’s even been shown to help with problem barking, as well as a hyperactive dog. You can even use it for things like leash pulling, so it can help with obedience training. There are many instances, and surely when you saw this you thought of a dozen different ways you could use it.

The Claim
The ThunderShirt claims to be able to provide gentle pressure, which soothes your dog and mimics being held so that they don’t have to be so afraid. They claim that 4 out of 5 dogs respond well to it, and that it helps lessen the amount of medication that is needed to calm them down during stressful times.

They say that there is some science behind the idea, and that using gentle pressure has been shown to have a calming effect on the nervous system. They go on to give several examples of pressure being used by both dog trainers and vets to help calm all sorts of animals down, and it is even used for humans that are suffering from certain behavioral disorders.

The Hype
If you’ve ever had to deal with an anxious dog, you know that they are not exaggerating the problem. It can be heartbreaking to watch them suffer, and you know that medication is not the best way to treat it. But they can be inconsolable, even if you are right next to them and reassuring them that everything is OK.

The Cost
It’s $40 for the ThunderShirt, and they run a free shipping offer from time to time, making that your total cost.

The Commitment
All you need to do is strap this onto your dog during the times that usually trigger their anxiety. Compared to listening to your dog whimper and yelp this is far more preferable. And if you’re giving them medicine for these times, it could be easier to put the vest on than to give them a pill.

Evaluation
The ThunderShirt is well made, you can tell that they didn’t simply outsource the production of this to the lowest bidder. It’s adjustable, so it’s easy to get the snug fit that it needs in order to do its job. You’ll want to make sure not to overuse it, or it will lose its effectiveness and just become their default state, allowing the problem to return. Only strap it on when they need it so they get into the habit of knowing what time it is when they have it on, and that everything will be alright.

For Cats Too
They also have a vest for cats, which claims to solve similar problems, but adds vet visits, litterbox training, grooming, and just overall jumpiness. It goes for the same price, and has the same basic structure, but is specially designed to fit cats. If you know that your cat would never sit still long enough to have you put this on them, you might want to pass on the idea. It would only be good for cats that are passive enough to agree to this sort of device.

ThunderShirt gets our nod of approval. Not only do we like it, but it’s one of the best-reviewed pet products we’ve ever seen. It is hard to get lopsided ratings when making a pet product because there are so many pet personalities out there, and so many breeds that it’s hard to make something that pleases both the pet and the owner. We also like how they give back to a good cause by donating vests to animal shelters. These are the dogs that really need it, because they are cooped up with a bunch of other dogs and need some reassurance.

One other good thing we like about them is that they provide a lot of video training, and support after you make your purchase. This shows that they are truly a company that stands behind their product, and is not just interested in making sales, but in keeping their customers happy for the long term.

Our Recommendation
This is a reasonably priced, well made product that you should definitely try using if your dog suffers from any of the problems described in the Overview section above. They have a money back guarantee, so there’s really no harm in trying it out on your pet to see how it works for them. Because 20% of dogs don’t respond to it, they have to have this guarantee in place because they realize not everyone is going to want to keep it. You can read reviews from other owners until your head spins but you won’t really know until you get it on your own dog or cat.

What do you think? Does ThunderShirt work or not?

95 Customer Reviews on “Does the ThunderShirt Really Work?”