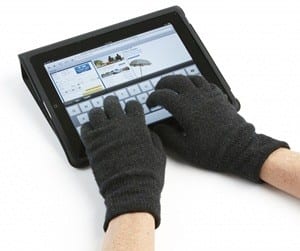 While many of our communication devices now come with the touch screen option, it isn’t problem free. Like when you are out in the bitter cold and wearing those cozy warm mittens, which you have to remove so you can use your touch screen device. Well maybe you won’t be putting up with frozen touch screen fingers any longer if you start using Touch Svreen Gloves.

Overview
You may not be aware that in the majority of touch screens they utilize what is called capacitive technology. What it means is that in order for your touch screen to respond it has to create a circuit with your finger. When you wear normal gloves this isn’t going to happen. So off come the gloves at least on one hand so you can make that call, or send that text. Of course a need was created and the need was met with the introduction of Touch Screen Gloves.

The Claim
Providers of Touch Screen Gloves claim that you won’t have any problems connecting your finger to your smart screen provided you are wearing gloves designed to allow you to do this. A good example of these types of gloves is the A Gloves, which have received a lot of good reviews. There are lots of different ones available to the consumer but they all basically do the same thing. Perhaps the bigger difference is what the rest of the glove is made of to keep your hands toasty warm on the cold days.

The Hype
Anyone that isn’t able to use their touch screens whenever they want no matter where they are will seek out a solution to the problem. Let’s face it for many of us these communication devices allowing us to stay tuned in with the rest of the world just with a touch, have become our closest friend. Solving the glove problem for screen touching doesn’t take much hype other than ensuring the buyers that its going to work.

The Cost
There are many different styles and varieties of the Touch Screen Gloves which means different price ranges. In the example of the A Glove that we mentioned above the price is $12.99 which is pretty reasonable and well worth the price if they allow you full use of your touch screen without having to freeze your hands to use it.

The Commitment
A couple of things you are going to have to keep in mind concerning your Touch Screen Gloves. You aren’t making a fashion statement here, but you will want to buy a color that is going to go with your outdoor attire. Fortunately you will have lots to choose from. You also want to make sure you get the right size so they feel comfortable. Now finally don’t forget to take them with you when you are venturing outdoors. You may want to keep them in close proximity to the device that you are taking along with you that has the touch screen feature. Like your iPad or iPhone or any others.

Evaluation
It really makes sense to have a product like this to really on as an accessory. How often have you frozen your fingers, or lost a mitten or glove because you had to take it off to use your device? So not only can the Touch Screen Gloves be a finger saver they can be a money saver as well, not to mention the convenience of no frustrations of using your touch screen outdoors.

We are going to give the product in general a Thumbs Up rating and we will extend that to the A Gloves as well because they have a 4 star rating on their feed backs. If you are really innovative you can actually make your own Touch Screen Gloves. With them being reasonably priced and easy to order, why bother really? You still would need to buy a regular pair of gloves to modify them.

Our Recommendation
If you want to enhance your touch screen conveniences then you may also want to check out this nifty tool called the Luma Stylus which acts as a finger replacement when using your touch screen devices.

What do you think? Does Touch Screen Gloves work or not?

← Previous Does DermaSolve Really Work?
⚅ back to blog
Next →Does Gutter Whiz Really Work?