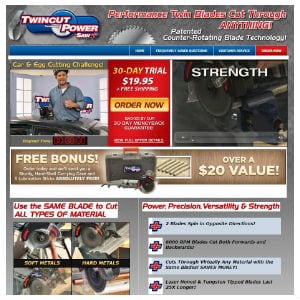 The Twincut Power Saw is said to have twin blades that spin in opposite directions, enabling you to cut through just about any material without having to change the blades. It seems like it would save time and allow you to complete various projects, but what do real users say about how it works?

Overview
When creating your perfect mix of power tools, you simply must have a power saw. They come in handy in so many situations, even if you’re not going to use it for a specific task or hobby, once you have one it seems situations arise where you need it. A versatile saw like this one would be great, but you have to be sure that it really can cut the way it’s advertised to, and that you won’t be disappointed once you get it home and unboxed.

The Claim
The makers of the Twincut Power Saw say that it has two blades that spin in opposite directions, which is supposed to be the reason why it can cut so effectively. They say that it’s spinning at 6000 RPM, and that the same blades can cut through a myriad of different materials, so you’re saving on the cost of having to buy multiple blades for different materials. They say these blades are designed to last 25 times longer than ordinary saw blades because they have tungsten on the tips, and have been laser honed.

They go on to say that there’s less kickback with this saw because you’re able to cut with more accuracy. They say that there is minimal vibration when using the saw, so there’s fewer sparks, and less overheating than using a typical power saw. They say the motor operates at 900 watts.

The Hype
The hype comes from how many things they say you can cut through, and the discrepancy between the claims and what real users are saying about its ability to cut through different materials. There’s obviously some exaggeration going on here, and from all accounts you likely wouldn’t be able to cut through a car with this, not sure why you’d want to in the first place.

The Cost
Twincut Power Saw is sold for three payments of $60 plus shipping is added to the first payment. So you’re looking at $220 when you factor in the whopping $40 shipping charge. We are not sure how they’re coming up with this price, since most power saws clock in at $50 or less. For the same price you could have a 4 power tools, each tailored to the specific job you’re working on so that you can get a more precise job done.

The Commitment
The reason they say this saw is so impressive is that it’s supposed to save you from having to change out blades, and allow you to cut through different materials all with the same tool, so it would be able to replace the need for so many power tools.

Evaluation
The Twincut Power Saw has some steep competition in the world of power tools. Companies like Black and Decker, Skil, and others have been around for so long making power tools people can rely on. Coming into the market and saying that your saw is better than the ones on offer from the major brands is a big claim, and you’d better be able to back it up, especially when you’re trying to undercut them on the price.

It’s hard to argue with the feedback that’s coming in from people that have bought this and tried to cut with it. It’s not very favorable, and with the $40 shipping charge even if you try it out and want to return it you’ll be out that $40 plus the cost to ship it back. For that price you could have bought a power saw with one payment that actually works.

The Twincut Power Saw is getting our Risky Try rating, based on feedback that suggests it might not be the safest saw on the planet, that it’s not powerful enough to cut through what it’s shown to be able to in the promo video, and that you might not be able to fine replacement blades for it easily.

Our Recommendation
Instead of this, why not go for a better reviewed Multi-Cutter from Skil, a brand that has been around for years and years and has a long track record of making successful power tools. It’s also in the $35 range instead of the $180 range, so you can get something that works in a bunch of different situations without spending nearly as much. You’ll probably still need a power saw for the tougher jobs, but you can pick one of those up and still come in less than the price of the Twincut.

What do you think? Does Twincut Power Saw work or not?

← Previous Does Bark Away Really Work?
⚅ back to blog
Next →Does the Swivel Sweeper Max Really Work?