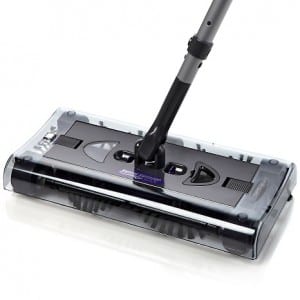 The Swivel Sweeper Max is a follow-up to the enormously popular Swivel Sweeper, and boasts some upgrades that are supposed to entice you to make a new purchase at a larger price point than the original. So let’s see if these new features are worth buying into.

Overview
It’s hard to deny that the Swivel Sweeper made plenty of inroads into millions of homes across the country, becoming the preferred way to sweep up the house, and proving to be more efficient than using a broom in many instances. The reason it tends to outdo a broom is because you’re not just moving dirt and debris around the floor, you’re picking it up on the first pass.

The Claim
The main claim by the makers of the Swivel Sweeper is that it’s easy to use, lightweight, can swivel in any direction, glides over surfaces smoothly, changes surfaces without a problem, is easily emptied, and lasts for 45 minutes on one charge, is cordless and portable, and is not sold in stores.

The Hype
The hype is that this is essentially still just a sweeper, but it’s being marketed by a company that has already had great success bringing the original Sweeper to market, so they know exactly how to advertise this in a way that gets you to want it.

The Cost
The Swivel Sweeper Max is sold on the official website for $55 and it’s broken down like this: It starts off at a base price of two payments of $20, plus $15 shipping, and you end up getting two full sized sweepers, and two mini handheld sweepers. Since you’re getting two of them, the price is right if you split it in half, as other sweepers with comparable features are in this price category, and most of them don’t come with a mini sweeper as well.

The Commitment
This is supposed to make your life easier when it comes to cleaning up all sorts of messes around the home. It can pick up pet hair, human hair, and any sort of dry debris on the ground. It’s not designed to pick up wet messes and spills, so you’ll want a Hurrican mop or something similar for those kinds of messes.

Evaluation
The Swivel Sweeper Max is a product that you can tell they spent time on thinking of how to make it better. The way you can empty it without touching anything, the way you can remove built up hair from the brushes easily and without a tangled struggle are both great features. They’ve also managed to keep this lightweight, so you don’t end up lugging around a big heavy vacuum when you just need to clean up a small mess. And you can use this up and down stairs without throwing your back out.

When it comes to buying a sweeper you have to know what all of your options are. You can buy one that doesn’t have any power to it, but then you’re relying on the brushes to do all the pickup work. You can get one that’s corded, but then you’re going to have to deal with the problems of a corded sweeper, which will be a lot like a corded vacuum cleaner. There are also sweepers out there that are heavier, so you have to deal with that heaviness as you move about your home.

The original Swivel Sweeper got somewhat mixed reviews, with many users saying that it worked great, and is lightweight, and others saying that the battery didn’t last long enough. Keep in mind that this Max model has many similar features as the original, so there’s a chance that they’ve made some improvement on this, and also there’s a chance that it could have some of the same problems as the first one.

Overall, the Swivel Sweeper Max is getting our Solid Try rating. It has enough features that make it worth getting if you have an older model of sweeper, and makes a great first time purchase if you’ve never bought a sweeper before. We like how the roller brushes are removable so you can take them out, get all the hair off of them easily, snap them back in and it works just like new.

Our Recommendation
This sweeper has a lot going for it, and if you don’t have something like this already, you may want to pick this up. Have a friend go in on it with you since you won’t likely need two of them. At the $27.50 price point you are going to end up with a good sweeper, and a mini sweeper for small messes, all delivered to you. That’s not a bad deal, considering you have 60 days to try it out and see how you like it.

What do you think? Does the Swivel Sweeper Max work or not?

← Previous Does the Twincut Power Saw Really Work?
⚅ back to blog
Next →Does Magna Blade Really Work?

11 Customer Reviews on “Does the Swivel Sweeper Max Really Work?”