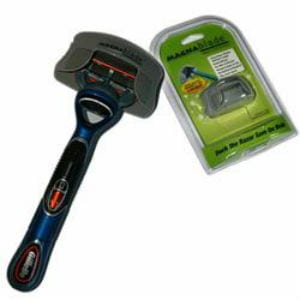 Magna Blade is a docking station for your razor that it supposed to keep it sharp much longer than it would with regular use. It’s supposed to use the power of magnets to get the job done, and they say it works by keeping the molecules on the blades intact. But can this really work?

Overview
With the price of disposable blades being what they are, it only makes sense that you’d want to get the most out of each one. Some of the fanciest blades out there can cost up to $4 a cartridge, and if it’s only lasting you a week or two that can really add up to a monthly and annual cost.

The Claim
The makers of Magna Blade say that it can extend the life of your blade by up to six times. This means that if your blade currently lasts two weeks, they can make it last 3 months. That’s a pretty impressive claim, considering that it would save you from having to buy six more razors. Of course that’s the claim on the best case scenario, and whenever you see the words “up to” it means that the actual performance can really be anything from zero to six times.

They also claim it’s a green product, and if it works they’re right because it’s helping to extend the life of a disposable product and therefore doing its part to reduce the amount of landfill created each year.

The Hype
The hype comes from the fact that razor blades are a consumable product and used by millions of men across the country, so it becomes a big business because it means that each month millions of guys will run out of blades and need to go buy more.

The Cost
The Magna blade is listed at $20 plus shipping, which pretty much matches the case study they provide of an 8 pack of the most popular blades, which we’re guessing is a Gillette razor, most likely the Fusion line because those prices seem to line up just right. They say that with average use the 8 pack lasts 2 months. With the Magna Blade in place they’re saying that an 8 pack would last you a full year. That would be well worth the initial outlay if you could pay just $25 for arguably the best razors out there, and it would last you for a year.

The Commitment
This is perhaps the most interesting feature of this product. All that you need to do is use it to store your razor between shaves. It’s not actually sharpening the blade, but keeping it from growing dull, so you don’t have to use any specific motion to try and sharpen the blades, you simply place the razor in the holder and you’re good to go. They say that you should start off using it with a new razor that you can give it the best evaluation. That way you’ll be able to tell how long it still feels like a new razor.

Evaluation
Keeping this in the holder is easy enough, but for the Magna Blade to be worth buying it would have to do what it says and save you money on buying new blades. This is pretty subjective, since it’s not like you’re going to take a microscope to your razor to see how well the blades are holding up on a microscopic level, so it’s going to come down to how they feel on your face as you’re shaving.

The case that they’re making is that your blades deteriorate in between shaves, and that this device holds them together better when you’re not shaving. But your razors go dull from having to mow through your facial hair, so it seems like the damage is done to the razor while you’re shaving, not while you’re not shaving. They’d have to make the case better on how this works, and perhaps show an illustration of what it’s actually doing in order for it to earn a higher rating for us. Still, we’re saying it’s good to give it a try, the cost saving potential is just too great.

The Magna Blade is earning our Solid Try rating. With this price point it’s about the same price as an 8 pack of the more expensive refill packs, so all it would have to do is save you from buying 8 new blades, which shouldn’t be a problem as long as you keep your razor in it between shaves.

Our Recommendation
There’s really nothing else out there that we’ve found that is promising to keep your disposable blades sharp. We’ve seen other razors come along, like the One Razor that tries to replace those expensive 5 blade razors with just a single blade, but nothing that encourages you to use the disposable blades you’re used to and just keep them sharper.

What do you think? Does Magna Blade work or not?

← Previous Does the Swivel Sweeper Max Really Work?
⚅ back to blog
Next →Does Scan Stop Really Work?