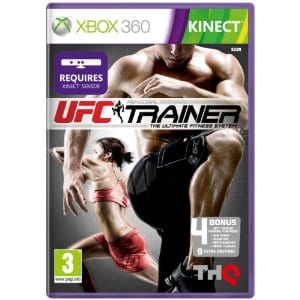 The UFC Personal Trainer says that it can get you the ultimate UFC body with its various workouts. Available on the PS3, Wii, and Xbox 360 it involves the use of motion detection to make sure that you’re performing the exercises correctly. But can you really get MMA fit by using a video game system like this, or are there better options out there?

Overview
It’s hard to deny that UFC fighters have enviable bodies, but they train for them each day to prepare for their fights, and their fitness is almost a byproduct of the preparation they do to get ready for the next fight. Of course, they’re also trying to make a certain weight, so in addition to their training they’re going to be eating a diet that will either slim them down or bulk them up depending on which weight class they’re trying to make.

The Hype
The UFC has been gaining in popularity in recent years, with more and more people getting interested in watching the fights, as well as get into the same sort of shape as the fighters they see. There are even MMA training programs popping up in fitness centers across the country that promise to get you a battle-ready body. Being able to do these workouts without a personal trainer and from the comfort of your home would definitely be awesome.

The Cost
You can pick up UFC Trainer pretty inexpensively, either getting it new for around $25 or less, or going pre-owned for an even bigger bargain. No matter how you look at it, this is a pretty economical way to go for a MMA training system, with most DVD-based programs going for at least twice that or more. Plus you have to consider that a DVD won’t be able to replicate the motion-tracking that today’s video game consoles are capable of.

The Commitment
Just because everything is presented to you in an easy to use format, you might think that this is going to be a breeze. But you’d have to treat it seriously and not miss any workouts if you want to see results. That means you’re going to have to commit to this just as much as you would any other weight loss or fitness program.

Evaluation
From what we’re seeing it makes a difference which platform you get this game for. Those playing on the Wii are saying that it’s not worth the purchase because there are some bugs and flaws in it, preventing you from getting the full experience. Those on the Kinext for the Xbox are generally pleased with it, and are giving the sort of feedback that you’d expect from a video game that’s getting you to work out. There are those that say it’s great and is working for them, and others that say it isn’t living up to expectations.

And for those on the PS3 the motion sensors aren’t picking up their movements as accurately as they expected. When it comes to all three system, the accuracy with which they track your body during the routines is extremely important. If it’s not on point, it just becomes a gimmick and could actually act to demotivate you. If you’re going to get the right kind of correction, the machine needs to know if you’re doing it right, and if your body, arms, and legs are all in the right place. If it’s off too far then the feedback it gives you is going to be misleading, and counterproductive.

So while some of the game review sites might give this a high rating, they are playing under optimal conditions, and there’s no guarantee that your at-home experience will be like theirs.

Overall, the UFC Personal Trainer is getting the Thumbs Down rating from us. There’s just too much feedback about the game not working properly, and when it does work there are still enough issues with it to prevent half of the people from getting a good workout. If the folks at THQ can figure out the technological issues and present a game that runs smoothly and tracks motions more accurately they may have a winner on their hands. We’ll anxiously await the second version of this program, to see if they’ve fixed the glitches and have done something about load times and the user interface.

Our Recommendation
At this juncture there are better DVD-based training programs that either focus on getting you in shape, or go into more detail about MMA fighting techniques. For example Anderson Silva has his own DVD fitness program, so you might as well learn from a UFC champion if you’re going to take instruction. Also there are programs like Tapout XT that focus more on getting you the body of a UFC fighter, without as much attention paid to teaching you how to fight.

What do you think? Does UFC Personal Trainer work or not?