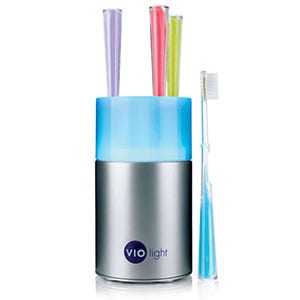 Violight makes an impressive line-up of toothbrush sanitizers that promise to keep the germies off your toothbrush. The reviews seem a bit split on this one, which might make it harder to make a decision whether to buy it or not. We analyzed the results it’s getting to make it a bit easier for you.

Overview
UV sanitizing for toothbrushes has been around for several years now, and Violife seems to be trying to be the one-stop source for all of your needs. They have various collections of toothbrush accessories, as well as actual toothbrushes. They come in several different cute varieties, so there is sure to be one that entices you to buy it, as long as it does what it says and makes it so your toothbrush is cleaner.

The Claim
The main claim for Violight sanitizers is that they kill almost all of the germs that end up on your toothbrush using UV light. They put it at 99.9% of the germs, which is what most antibacterial products claim these days.

The Cost
The prices vary by the model, and what sort of bells and whistles it has. The four-brush countertop model can be found for less than $40. Individual sanitizers like their Zapi line also run about $35. It seems a bit pricey for a bathroom accessory, but when you consider that they’re trying to make a UV light that disinfects your toothbrush, you wouldn’t want to bargain shop too much or you’ll just be buying a cheap light with no UV function at all.

The Commitment
This is mostly a hands-off product for you, replacing your current toothbrush holder. If you get one of the individual holders it might take a bit more time to put it in instead of what you’re used to, but the difference should be negligible. Most people find that it simply dissolves into your regular toothbrushing routine.

Evaluation
The main crux to the argument of getting a Violight sanitizer is that it’s keeping your toothbrush free of germs. If it’s not doing that then it’s simply an overpriced toothbrush holder. Considering that unless you take your toothbrush to a lab to see whether or not it has less germs on it than normal, you won’t really know if it’s working or not. Much of it rests on the placebo effect, and if you believe it’s doing something it might actually help you get sick less.

The critics of devices like this point out that the UV light doesn’t have enough power to keep the area surrounding the toothbrush free from germs. Although UV lights are used to purify water to make it potable, these are very strong industrial models, and the belief by many is that when transferred to a smaller size it loses something in the effectiveness.

Violight is getting our Thumbs Down rating, based on the feedback that it’s received, with several users stating that it breaks down after using it for a short period of time, and many making strong claims that it doesn’t do the job of keeping things sanitized. At this price you’d want to be totally sure that it’s doing what it says it can do, and since this isn’t the case it doesn’t really make sense to drop the money on it.

One of the most convincing displays that it’s not really helping to keep your toothbrush clean is that the inside of the unit can become dirty and grimy, and some users have said they’ve even found mold growing in it, right by the lamp. It’s also interesting to note that out of the positive reviews, it’s unclear what the users are basing their positive feedback on, whether it’s that the device has been operational for them, or whether they have some sort of proof that it’s working to keep things disinfected.

One user claims that their dental visits have been better, but that isn’t a claim made by Violife, so it’s not clear why they think that the device would have led to better dental visits. The main benefit should be peace of mind knowing that you’re not putting a brush into your mouth that is infected with E. coli or some other germ usually found in bathrooms. A simple toothbrush cover might also protect your brush from having these airborne particles land on your toothbrush. You can also try storing your toothbrush in the medicine cabinet, or in another room altogether.

Our Recommendation
While it’s nice to think that UV sanitizing would work, it’s hard to get around the idea that the UV technology could be produced and sold at this price point and still be effective. What we’ve seen is pretty convincing that it doesn’t work as well as it claims it does. It might still be good to have if you believe it will work, and it does protect your brush from simply being left out in the open.

What do you think? Does Violight work or not?

10 Customer Reviews on “Does the Violight Toothbrush Sanitizer Really Work?”