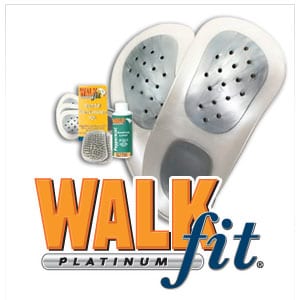 WalkFit Platinum our orthopedic inserts that are designed to realign your spine, as well as your pelvic area which in turn should lessen the strain on your knees and hips and lower back. their original model sold millions of units, and received plenty of feedback, so let’s take a look at their new improved platinum model to see what’s really been upgraded.

Overview
Orthotics can definitely help with foot pain, but can also have a positive domino effect on other areas. Most of the time we take our feet for granted, but they serve a very important part in our daily lives. We usually don’t stop to consider their importance until something goes wrong. We might also not associate a pain in our hips and lower back with having to do with a problem involving the feet. But it simply goes to show that the body is really interconnected, and two apparently separate problems are often related.

The Claim
WalkFit Platinum claims to be new and improved compared to their older version. One of their new additions is a gel pad that is put in the heel so that when you step you get even more cushioning them before, and more shock absorption. They say that this gives you padding where you’d want it but firmness where you don’t want padding.

They also claim that they’ve added a new insert that mimics the effects of having a reflexology massage done on your feet. Reflexology has its own share of controversy and skepticism among people that wonder if it actually works or not.

They say the silver technology that they’re using in this platinum insert is a way to help ward off bacteria and fungus that causes foot odor to cling to normal inserts. They also claim that an independent study was performed that shows clinical proof that using their product release for pain in 9/10 people that use it.

The Hype
The hype comes from just how great they show people feeling after trying out these inserts. It’s one thing to say the product works and makes you feel good, but some of their testimonials are a little over-the-top. Even more hype comes from the fact that this is the second incarnation of basically the same product, so it is writing off of initial success that he had, and hoping to get some reorders for having customers, as well as attracting a whole new user base.

The Cost
WalkFit Platinum is $20 plus $10 shipping and handling. You’ll have to opt out of their joint pain supplement offer twice in order to get to the order page.

The Commitment
All that’s really required on your part is to insert these into your shoes, and just start walking like normal. It should start to put you into alignment right away, but the effects might take a few days or even weeks to show their full potential.

Evaluation
WalkFit Platinum seems simple enough, but if you get your orthotics professionally constructed from a foot doctor, they will take into consideration your unique foot makeup, and custom build your own set cording to your own needs. It seems like a one-size-fits-all insert wouldn’t be able to conform to the different foot problems people experience. However, as a way to provide comfort for your feet it might be just as good as some of the other gel insoles that are available.

If you’ve never taken any action to enhance your footwear and get things back into alignment, she deftly take the first step, whether it be with WalkFit Platinum or another insert. You be surprised just how much of a difference it can make throughout the day. There are shoes that have initially designed inserts, but usually it’s better to go with something that you can add to the shoes you currently wear.

What People Are Saying
The people in the WalkFit infomercials are depicted as having a miraculous experience with these inserts. Of course, many of these are paid testimonials, but some of them might be genuine. It’s not entirely unlikely that someone might get pretty excited about not having pain in their feet anymore. What’s more difficult to ascertain is whether or not people are benefiting from the overall well-being thanks to being in better alignment due to the inserts.

WalkFit Platinum lives up to some of the claims, but not all of them. You can confidently get these and know that you’ll be getting your money’s worth, but don’t think that your life will drastically change, or that all the pain in your body will go away just by wearing them. They will make your feet feel better, and walking might not be as painful if you currently are experiencing pain while just walking around.

Of course some people that use them have described amazing results and say that it totally made a difference in their life. However, these are “exceptional results” and not something that you can bank on just by ordering.

Our Recommendation
If you’re serious about getting orthotics, you should see if a foot doctor because they can take molds of your feet, as well as x-rays, and get down to the real problem of why you are experiencing this pain. They’ll then be able to order your very own set of inserts that are specifically designed for your condition. It might be the more expensive route to go, but this is something that you would only have to buy one time, and you could benefit from the results for many years.

What do you think? Does Walkfit Platinum work or not?

← Previous Does the Forearm Forklift Really Help on Moving Day?
⚅ back to blog
Next →Is the Comfortisse Bra Really That Comfy?

11 Customer Reviews on “Does the New WalkFit Platinum Really Work?”