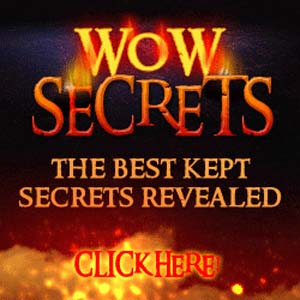 If you’re a fan of World of Warcraft you’ll soon be looking for things like WoW Secrets to give you the edge so you can enjoy it more, and waste less time with it. Peng Joon makes a pretty convincing case that he’s got what it takes to show you how to play the game better, so all that remains to be seen is whether this works in actual game play.

Overview
The world that is World of Warcraft is immense, and always growing and changing so it can be overwhelming to think about all of the things you’ll have to do in order to reach the levels you want to reach, and achieve the items and upgrades you want. But like anything in life it all happens one step at a time. That’s why it’s nice to get someone to show you how to take those steps, so you don’t have to run around doing things that aren’t necessary and you can focus on the parts of the game that you really like.

The Claim
WoW Secrets says that you won’t get your account banned by following their tips and that you will be able to get what you want in the game with less effort, and less wasted time. He says that you’ll be able to watch over his shoulder as he shows you exactly what you need to do in order to get the same results that he’s got. It’s the next best thing to having him stand over your shoulder and tell you what to do.

The Hype
The hype is that this is all about World of Warcraft and the game itself gets a lot of attention for being one of the biggest online games in the world. Its addictiveness has been featured on South Park, The Simpsons, and many other pop culture shows. Everybody that plays it for any length of time eventually builds up the desire to advance in the game.

The Cost
WoW Secrets is $17 per month and is covered by a full 60 day money back guarantee so you can actually relax, use this for a full two months, and see if he’s earned the money or not. If you’re able to do what he says, by the time you have to decide whether to keep it you will know whether it is worth the $17 in time savings and all the frustration you avoid.

The Commitment
He says that all you have to commit to is about a half an hour to an hour each week implementing his tips. However, if you want to be more aggressive with it you could. But just know that you will have to give something in order to get the results you want.

Evaluation
WoW Secrets is a very comprehensive system and Peng Joon is a charismatic host that will keep a smile on your face with his insights into the game. We like that this takes into account many of the concerns you might have, like will this involve cheats or other nefarious actions that could get your account banned. It also has a complete section on Gold and getting more of it, which is sorely lacking in other programs.

No matter whether you’re just a novice or consider WoW a hobby, you would still want to get this to open your mind to the different possibilities that exist within the game. You might find that you like it even more once you see things that you didn’t know it had. This makes sure that you get the full experience, and that you aren’t leaving a bunch of features hidden due to ignorance. Some people that said they only liked the game, ended up loving it after getting this guide. Also, it can make it so you can speed up the learning process and get to levels you thought would take the better part of a year. That alone makes it worth it.

WoW Secrets is getting a strong Try recommendation from us, because of all of the positive feedback its gotten, and also because we know how frustrating it can be to try repeatedly at leveling up and getting certain items and not being able to get them. If you’re worried that this guide will suck the fun out of the game because you’re just following instructions, don’t worry, because you can use it as much or as little as you like. You can still have fun exploring and just use this when you get stuck on something.

Our Recommendation
It’s really hard to play World of Warcraft without some type of strategy guide or some sort of assistance to show you what to do next. This is definitely one guide that is worth trying out, and it stays current with new updates every month that will show you new things that they’ve just figured out.

What do you think? Does WOW Secrets work or not?

← Previous Do Phiten Bracelets and Necklaces Work?
⚅ back to blog
Next →Does SEOPressor Really Work?