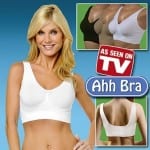 Getting its name from the sigh of relief many women give when taking off their uncomfortable brazier, the Ahh Bra hopes to revolutionize female undergarments. It claims to be able to do this without the use of any wires, and a new “body forming technology”.

But does all of this result in a bra that really works, or is it all a lot of fluff and hype? At this point many women have tried out the Ahh Bra, and there is plenty of data that has come in as to its effectiveness.

Overview
It’s no surprise that women everywhere are interested in the Ahh Bra. Conventional bras leave a lot of room left for improvement, and many women of all shapes and sizes have expressed their displeasure with what is currently on the market.

The Claim
The Ahh Bra claims that you won’t have any of the “poking, prodding, itching, or scratching” that you get from normal bras. Any woman that’s worn an ordinary bra can attest to these problems, which gives them a very large audience to work with.

Does your cup size not fit properly because you’ve changed size? The Ahh Bra claims to be able to fix this problem by forming to your body, whether or not you gain or lose weight. This would be especially helpful as our bodies tend to retain water or not depending on the time of the month.

Do you get that bulge look with your bras, you know, the kind where your back fat and arm fat get squished to either side of your bra? The Ahh Bra also claims to help with this because it is formed to fit those problem areas easily, and therefore gives a smooth natural appearance from the outside.

The Ahh Bra also promises not to slip and slide while you wear it because it has wide straps. This would put an end to constantly adjusting your bra throughout the day.

They also claim that you’ll be able to take better care of your Ahh Bra and easily wash it by tossing it in the washing machine and dryer without a care. Many traditional bras lose their size and shape after repeated washings, and easily get stained by the underarms.

The Ahh Bra really tries to cover all of the bases when it comes to dissatisfaction with bras.

The Hype
The commercials for Ahh Bra provide all the hype that’s needed. By connecting with women using the common bra complaints that drive us mad, they instantly create desire. It seems plausible that the bras could work, and that technology has improved to the point where a bra of this nature could provide the support that is being claimed.

The Cost
Ahh Bra does not try to price compete, and puts their bras somewhere between the cheapest bras you can find in supermarkets, and pricier models you might find at Victoria’s Secret. For $70 you get 3 bras, putting the per bra price at $23 each. Not a bad price if they work the way they claim to, but something of a rip off if they fall short of a perfect fit.

It is important to note that it does come with a 30 day money back guarantee.

Amazon has them for a much lower price than the official website. You can get the same set of three bras for $25-$30 depending on your size, with free shipping. That’s about half the price than at their main site, and makes these definitely worth a try.

The Commitment
There isn’t much you have to do except for replace your usual bras with the Ahh Bra. Many women have said that while the Ahh Bra is great for wearing around the home, they can’t commit to wearing it in public. While it does provide comfort, it doesn’t look proper enough to be worn outside of the home.

Evaluation
The actual quality of the Ahh Bra is there. Very few complaints have arisen about the type of material used, or the way the bra is constructed. In theory it should work as stated in the ads. However, after many trials in the form of actual users, it is shown to have mixed reviews.

This is something that can be expected in an area as delicate as women’s underclothes. Each woman, no matter how similar looking with clothes on, will have their own unique body form, including special needs in certain areas. That means that any sort of miracle bra product is going to get its fair share of mixed reviews.

It may work better for more petite women:

Common Complaints
One of the most common complaints about the Ahh Bra are that it rolls up from the bottom. This is easy to explain because it doesn’t contain a wire. Seems like they expect you to make a sacrifice for comfort, but if your bra is rolling up it doesn’t matter how comfortable it is, it will be just as frustrating.

Another complaint is that the bra just doesn’t give the support it claims to, and many liken it to an overpriced sports bra. This is in direct contradiction to the claims that they make, and if a bra doesn’t provide support, it is failing at its main function. Apparently the form-fitting material provides comfort, but does not give adequate support for larger cup sizes.

And many women also state that the bra flattens out their breasts rather than supporting them. This would most likely be due to the Lycra type of material being used. It gives the Ahh Bra that spandex quality that stretches but also attempts to keep things into place. This problem is most likely experienced by those with larger cup sizes, which is why it reminds women of a sport bra.

The overwhelming consensus is that if you have larger breasts, or are a bigger-sized woman overall, then the Ahh Bra will not work for you. Smaller sized cups or petite figures might find that it provides the support claimed in the ads.

For this reason, we can’t give the Ahh Bra the official Thumbs Up. It might get a Thumbs Sideways, since it is beyond anyone’s ability to say with any certainty whether it will work for you. There is about a one in four chance that it will work for you, judging by all of the feedback that has come in from previous users.

Our Recommendation
If you’re totally fed up with your current bra wardrobe then it’s worth a shot at getting an Ahh Bra. Many women have reported success with it, and you may fall into this category. Since there are too many varying body types and shapes, there’s no way you can make a proper conclusion as to whether it works until you try it for yourself.

After you try it out, be sure to return here to give your verdict!

What do you think? Does the Ahh Bra work or not?

← Previous Does Chef Basket Really Work?
⚅ back to blog
Next →Does Nioxin Really Work

6 Customer Reviews on “Does the Ahh Bra Really Work?”