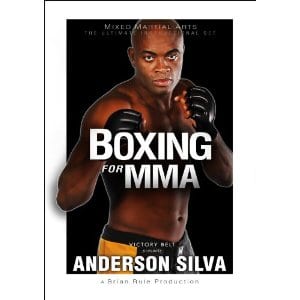 If you’ve seen the guy in the ring or the cage you’ve probably wondered if Anderson Silva MMA Training can help you become as effective. He’s broken down the different elements of his style into four pillars so that you can mimic what he does and cut down on some of the learning curve. But how good of a teacher is he, and can you really learn good MMA techniques with his videos?

Overview
Most gyms and training facilities across the country are starting to introduce MMA training as part of their fitness offerings. It’s getting to be quite a popular way to get fit, learn a little bit of self-defense, and also emulate the fighters that are seen on TV. Some people take it really seriously, getting the gloves and other equipment needed to really train hard. Depending on where you fit on the scale of interest in the sport, these videos might be something you want to look into as either a refresher course, or as the first time trying out new moves.

The Claim
Anderson Silva MMA training consists of a 4 pack of DVDs, each designed to cover a different aspect of your overall technique and approach. It’s got Muay Thai fighting, combos, boxing, takedowns, and how to defend against being taken down. The moves are demonstrated by Anderson Silva so you are seeing the proper form right from the source. It’s a good thing that he’s on the verge of retiring because the competition could watch these videos and use some of his own moves against him.

The Hype
Mixed Martial Arts fighting is pretty much at the height of its popularity these days, and seems to only draw in more and more fans as it goes along. At the pinnacle of all of this is one of the best fighters around, Anderson Silva. Anything he’s going to be involved with regarding MMA and the UFC is going to go over big with fans, and also those new to the sport.

The Cost
Anderson Silva MMA training is $120 for all four DVD programs. You can look at that as $30 per DVD, or just look at it as $120 for a complete training system that you can use again and again to perfect your form. Of course it’s not going to be the end-all be-all of your training if you want to take it further, but it is something nice to have so that you can go back to it when you need to, until you get things just right.

The Commitment
It’s safe to say that just by watching these videos you won’t become a mixed martial arts champion, but they can be part of your overall training and you’ll definitely pick up some good pointers. However, if you want to get really serious about this you’ll have to be dedicated to several hours of training each day, a strict diet, and a strong mental focus. Of course the only initial commitment that you need is putting these into the DVD player and pushing the play button.

Evaluation
If you expect Anderson Silva MMA training to teach you exactly what you need to know to become a great fighter, that might be an unrealistic expectation. However, if you just want to have fun and learn from the privacy of your own home without having to spend money on a coach, this would be a good system to get. Also, if you’re not quite sure whether or not you are truly interested in this, it is a good way to feel out your desire and see if it’s something you want to pursue further or just keep as a hobby.

The important thing to remember is to just keep at this day after day, because it makes it more fun when you start getting better at it. When you learn a fighting technique like this it builds on itself in a cumulative manner, so sporadic use is going to get spotty results, and you probably won’t have as much fun with it. It would also be a good idea to enlist a workout buddy that is also interested in it to keep you motivated, and you can also keep them motivated as well.

We’re giving the Anderson Silva MMA training series a Thumbs Up review, and not just because he could beat us up if we said it didn’t work. It’s because he’s the best fighter out there, and if you want to improve your style you should take notes from those that are already doing it the right way. However, if you’re looking to buy an MMA fitness training DVD program this isn’t the one you’d want. This is more about teaching you how to do the moves, and is not geared specifically to losing weight or getting in shape.

Our Recommendation
Eventually you’re going to have to come up with your own style, but that doesn’t mean that you can’t pick up pointers from a lot of different pros, as well as from a lot of different martial art disciplines. The end result will be a hodge podge of techniques and tactics that you can choose from in the moment. Anything that adds to your bag of tricks, or sets the foundation the way these DVDs do will help you on your journey.

What do you think? Does Anderson Silva MMA Training work or not?

← Previous Does Lipogaine Really Work?
⚅ back to blog
Next →Does The Step Diet Really Work?