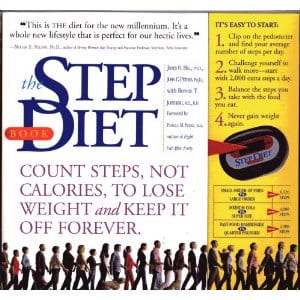 The Step Diet says that instead of counting calories you just count steps and you’ll reach your weight loss goals. It takes a new approach to what is allowable as far as food goes, and the exercise regimen is as easy as going for a walk. The entire system seems to stress moderation and slowly working your way to your goal, which is a strategy proven effective time and time again. But how well does it stack up to real-world use, and are people getting good results with it?

Overview
It’s funny to think something as simple as walking can help you get fit, or lose weight. It just seems like something we do by default and not something that requires a lot of thought or determination. However, when you start wearing a pedometer you realize that you might not walk as much as you thought you did and by increasing the amount of activity you get each day, even something as simple as going to the mall and walking around for an hour, you end up getting more fit.

The Claim
The Step Diet allows you to eat the foods that you enjoy, it only asks that you cut back your normal portion size by 25%. When you combine that reduced intake with more activity in the form of more steps taken each day, the net result should be a reduction in the amount of calories you would normally be taking in, but without feeling like you’re dieting. This is because you are not abstaining from foods you love, and you are not putting your body through a rigorous workout program that makes you sweat, and makes your muscles sore.

The other facet of this program is that you need to start increasing your steps each day starting at 2000, and working your way up to the goal of 10,000 steps per day. You’re allowed to count all the steps you take, even the mundane ones, so depending on how busy you already are, and how active you already are, this could be an easy or more difficult thing to do. But starting off slowly like they recommend is the best way to go about it. Trying to go from a few hundred steps per day to 10,000 overnight will only make you feel like you are trying to climb a huge mountain.

The Hype
This diet received a lot of publicity and media hype several years ago, and now still enjoys some popularity in dieting circles. The basic premise of this is that you will be losing weight pretty effortlessly, which can be considered a little bit of hype, but it shouldn’t be because it actually is taking a different approach than other diets and the principles behind it are sound.

The Cost
The Step Diet is a book that can be purchased on Amazon for less than $10. You’ll also want to invest in a pedometer to track your steps everyday. You can find a cheap one for less than $10 or a more advanced one for less than $20. Overall, this is one of the least expensive diets to get involved in, they don’t sell any prepackaged foods, you don’t need to drink any protein shakes, and you don’t have to wear specific exercise clothes or buy any gadgets other than the pedometer.

The Commitment
This is one diet that you wouldn’t have any problem sticking with for the long term. This is because once you develop the habit of taking 10,000 steps per day it will just seem normal, and on days when you don’t hit your mark you’ll feel like that was out of the ordinary.

Evaluation
The Step Diet gets a lot of things right here, and it’s hard to imagine someone not seeing results by following it to the letter. First, by reducing your food intake by 25% you are immediately reducing the number of calories you normally take in. When you combine that with using up more calories per day by taking more steps, you should see a caloric reduction that will result in weight loss and fat loss. The genius of the system is not restricting foods, as this is the Achilles’ heel of most diets which lead to feelings of starvation and deprivation.

You wouldn’t need much willpower to stay on this system because there’s nothing to will yourself to do or not do. Some people might have trouble getting their step count up, but working on it gradually should fix that problem. Even if you have to go in 50-step increments and take months to get to 10,000 steps, it doesn’t matter because you’ll be losing weight the whole time and reaping positive benefits along the way.

Final Review of The Step Diet

The Step Diet is based on science, being written by a handful of doctors, and doesn’t include anything in it that even closely resembles a fad diet. Many people say that it shouldn’t even consider the diet because it doesn’t feel like one. If you’ve tried a lot of the different diets that have risen and fallen over the years, you might be a little reluctant to try something new, but we recommend giving it a try.

Our Recommendation
This is a program that will get easier as you go along, rather than harder. In the beginning it will be hard to walk around more, and you will have to think about it a lot. As it becomes more a part of your daily routine it will just be something you do, and you’ll just start automatically lacing up your walking shoes.

What do you think? Does The Step Diet work or not?

11 Customer Reviews on “Does The Step Diet Really Work?”