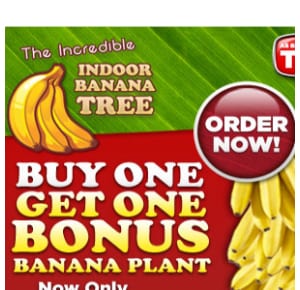 If you’re tired of buying bananas from the store, Banana Giant might let you solve the problem by growing your own at home. They say that their banana plants will produce a yield of several dozen bananas, and that they’ll keep growing them again and again, giving more fruit as the seasons go by. But how feasible is this really, and will it earn back it’s cost in edible fruit?

Overview
Today’s companies are finding all sorts of ways to package existing products in new ways to get us to buy them. That’s really the case here, since bananas have obviously been around for a long time, and therefore the plants they come from have too. What they’re doing here is simply getting you to go along with the idea of being able to grow the fruit at home and have them available without going to the store.

The Claim
The makers of Banana Giant say that their plants are guaranteed to grow and produce fruit for you. A lot of what they describe applies to bananas or banana plants in general, and not specifically their plants. They say that banana trees can grow up to 8 feet tall, which is true but doesn’t necessarily mean that the plants you receive will make it this big. They also try to sell you on bananas, touting their nutritional benefits and mentioning the different ways you can incorporate bananas into the foods you’re already eating.

The Hype
They say that you can spend upwards of $5 for a bunch of bananas at the store, and of course it is possible to do that if you buy a very large bunch, and catch them when they’re not in season. But most of us don’t pay quite that much for bananas, and they can readily be found for far less. This is also a tough sell because most of us probably didn’t have the desire to grow bananas at home, and only got wise to the idea after seeing the TV ad.

The Cost
Banana Giant is $22 for two plants shipped to your door. Checking out the competition we found that this is a pretty low price for a banana plant. Other places have them listed at $40 or more for just one plant. It’s unclear why they are selling them at this price, or how they can guarantee that the plant will grow. They have a 30 day guarantee, but with the time it takes to grow bananas you’re probably not going to make your mind up in this time frame, and the $10 you get back might be just enough to pay for return postage.

The Commitment
They say that this plant is easy to grow, and that you won’t have to do much to get it to thrive. It might be a little more hassle than just buying bananas from the store, but they’re hoping that the novelty of having bananas at the ready will help you overlook that. And be prepared to settle in for a long term relationship, because they say it takes a full 3 seasons before you’ll see the biggest yields of bananas. This might be longer than some of us would want to commit to, and you might lose interest after a disappointing first season.

Evaluation
Banana Giant makes a pretty strong sale here, with a price point that will lead many to give it a try. After all, getting a banana plant can run anywhere from twice as much to many times as much if you go a different route. If these are able to grow and produce bananas, they’re a pretty good investment. If they totally flop you might have had just as much success with a more expensive plant bought from a different supplier.

They don’t have the market cornered on banana plants, so it’s not like you’re forced to buy them here. The case must be made for why you’d want to go with these plants over ones you can buy at another online location, or through your local gardening shop. The price is one part of the equation, since you’re getting these for $11 each effectively. The 30 day guarantee is effectively rendered useless, since you’re paying more in shipping than you are for the plants, a technicality they use to make sure they always come out on top.

The folks at Banana Giant don’t make any big claims like they’re using genetically modified plants that are guaranteed to produce bigger bananas than you’ve ever seen, they simply are touting the benefits of owning your own banana plant. Whether you want to go with their offer or find the plants through a different method is up to you. It could be the case that you’ve snapped out of the idea of growing your own bananas and will just stick with your supermarket ways.

Our Recommendation
If you’re a banana enthusiast and still like the idea of having fresh bananas ready for you in your home, you should give these a try. At $11 a plant you’re basically doubling down on the odds of one of them making it to adulthood and producing fruit. Patience is a virtue on this one, so you should expect to put the time in, because they say it’s the third season where this plant really starts rocking so you should reserve judgment until then.

What do you think? Does the Banana Giant work or not?

← Previous Does Hand Perfection Really Work?
⚅ back to blog
Next →Does the Pet Cave Really Work?

Customer Review on “Does the Banana Giant Really Work?”